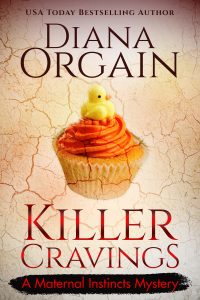 “Very talented,” Nate said. “I especially love my little bar.” She
stood up and hurried behind the bar. “This right here is my charac‐
ter’s personal spot.”

“I have arrived!” a man’s voice called from the audience.

“Ricky!” my mother called. “Oh, Kate, this is Director Ricky. He is
doing a fabulous job, if I do say so myself. Ricky, this is my daughter
Kate, and my granddaughter Laurie.”

Ricky was a fairly young guy. He was younger than some of his
cast members, but he had a certain commanding tone about him that
let me know he was in charge.

“A pleasure, Ms. Kate,” he said and smiled down at Laurie. “Hey,
cutie,” he said and then looked up at Paula. “Paula, I have to say, I’m in
love with this set.”

“Thanks for the opportunity,” Paula said.

“Of course,” he said and reached into his coat pocket. “Here, these
are for you. Tickets for the after party on opening night.” He looked at
me. “Would you like to come?”

“Your mom is one of the stars of the show,” he said and reached
into his pocket, pulling out two tickets.

“You are already coming to opening night,” Paula said. “Plus, a little
birdy told me that Cassandra’s Cookies is catering the party.”

“As in the café that you’ve had Jim run out to, I don’t know, eight times
since you’ve become pregnant,” my mom said, giving me a playful nudge.

A vision of the dark chocolate brownies with the purple icing
began to dance in front of my eyes. I had some at home in the fridge,
but I was down to just two now.

“Speaking of which,” Director Ricky said. “I need one of you to run
by the café to drop off our catering contract. It’s in my office now, but
we need to get right to work on our tech rehearsal.”

“Are you sure?” Ricky questioned, taking a glance at Laurie –
probably not wanting it to be too much of a burden.

“It’s no problem,” I said. “Besides, I can restock my brownie supply
while I’m there, since its’ all baby number two is letting me eat.” I
patted my barely noticeable baby bump.

He smiled. “Well, I really appreciate that.” He handed me the
contract, and I stuffed it into the stroller.

Okay pregnancy brain, don’t let me forget to do that, I told myself.
The front doors to the theater flung open, and we all glanced up to
see Vicente stepping in from the lobby. He was striking in a black
leather jacket and tight jeans. Under one arm, he carried his motor‐
cycle helmet, and with his free hand, he ruffled his thick dark wavy
hair. He graced us with a smile that would make a school girl blush,
and even Paula’s cheeks got a bit rosy.

Vicente glanced around and nodded to the cast and crew, making
his way down the aisle toward the stage. When his eyes landed on me,
he gave me his special cat-that-ate-the-canary smile. The one that told
me he thought I’d made a dreadful mistake not to have taken him up
on his offer as the lead.

A man like Vicente Domingo could never imagine giving up the limelight.

I wiggled my fingers at him. “Congratulations, I understand the
show’s already sold out.”

He gave me a condescending nod, as if I should have expected
nothing less.

He glanced up at the stage, smiling and looking quite satisfied.

“Just thought I would come take a peek at the set, and I have to say, it’s
looking good.”

“Very sophisticated – just what I was going for,” he mused, and I
could sense several of the actors cringe. They weren’t kidding.
Domingo still had no idea that Ricky had turned this drama into a
comedy. Ricky did not seem at all fazed.

“You coming opening night, I hope?” Ricky asked, smiling like he
was not secretly plotting to put on a joke performance of what
seemed to be Domingo’s pride and joy.

“Wouldn’t miss it for the world,” Domingo said. “I will be here
front and center.”

While the cast and crew got ready for their tech rehearsal, my
stomach began to rumble.

How can I even be hungry again?

But it wasn’t hunger exactly, it was the purple icing brownies
calling my name.

So I bid my mom and Paula farewell, told them to break a leg, and
headed out with Laurie in tow.

Confession? The café wasn’t exactly on my way home. It was about
five minutes out of the way, but honestly, I had to make sure I had
plenty of those amazing brownie’s in stock for my next stakeout. I
couldn’t miss another money shot.

Laurie giggled and played with her stylish teether on the way
there, and I plopped her into her stroller again before we headed
inside. The outside of the café was painted bright orange. It was very
colorful and fun; I hadn’t ever actually been here myself. Jim had been
doing the supportive daddy thing – running out constantly to help me
satisfy my intense cravings.

Once inside though, I was a bit taken aback by the wild color
palate. The walls were a mix of fire-engine red, with yellow and
orange swirls, so much so that it made my head spin.

I made my way over to the counter, eagerly scanning the display
case for my preferred treat. Disappointment tugged at me when I
didn’t see any of those brownie’s on display.

The woman behind the counter had red hair, pulled up tight in a
bun. She smiled. “May I help you?”

“Kate?” she asked, taking me by surprise.

“I knew it,” she said. “You’re Jim’s wife, right? He comes in here
three times a week to get you those brownies. I’m Cassandra, the
owner.”

“Hold on, I have a batch for you in the back that just got taken out
of the oven. I need to wait a few more minutes before I ice them,” she
said. “That okay?”

“That’s fine, oh, and here. This is the contract for the local theater.
I guess you are catering their cast party?” I reached down and grabbed
the contract out of the bottom of the stroller, handing it over to her.

She smiled and thanked me, not really questioning why I would
have it. I watched her step back into the kitchen, probably to file the
contract, and I sat down by the window. A few minutes later, she
reappeared with a small plate and a to-go box.

“Tell you what, it’s on the house,” Cassandra said, smiling as she
put the small plate with a brownie in front of me. “The to-go one’s
too.”

“Wow, thank you!” I said, happily grabbing the fork she had placed
by my plate.

“Oh, that must be Laurie!” she said, bending down to take a look
inside the stroller. “So cute. She looks like her daddy.”

I smile. “She really does. I’m guessing Jim has told you about
Laurie?”

“Well, he’s been here enough for us to have chatted a few times,”
Cassandra said, smirking slightly. “I don’t get a lot of male customers
coming in and ordering chocolate in bulk like that. I finally asked him
what was up, and he told me about his pregnant wife’s cravings. He
showed me a picture of Laurie. Super cute girl you got there.”

“Thanks,” I said, grinning.

“No, but my mom is. I’ll be going to opening night, and the
director was kind enough to invite me to the after party, so I figured I
could bring the contracts by for him – and get me another one of
these amazing brownies too.”

Cassandra laughed. “Well, tell you what, they weren’t in the order,
but I’ll throw in some of those brownies at the party so you can look
forward to having them after the show.”

“I try to keep my customers happy,” she said. “Especially ones who
come in and order a dozen brownies every few days.”