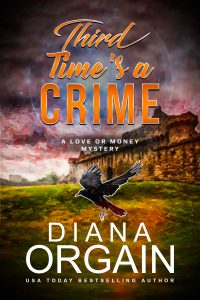 “Some fresh air will do you good, darling,” he said, as they walked
out together.

Scott looked at me. “Well, I guess we got an hour to kill. What you
want to do? Walk around the castle?”

“Heck, no,” I pushed the doors open to get us to the outside. “Let’s
stay outside for a while, let the crew get rid of the birds on the inside.”

He laced his fingers through mine. “That sounds like a great idea.”

We walked toward the dead birds that littered the garden area.

“Predators will come tonight,” I said.

He laughed. “Predators of all kinds.”

“We have a good chance of winning, though,” he said. “Think of
that. Your dad can use the money to rebuild the farm and . . .” He
hesitated.

We’d been wanting to get the money so we could finally take our
vacation together, hopefully get married, but since the accident, Scott
hadn’t talked much about our relationship.

Something about his demeanor bothered me. I knew it was
tough on him after the mugging in Spain. He’d suffered a head
injury and had even been in a coma for a week. Now at times, he
couldn’t seem to recall mundane things, but worse there seemed to
be a strange vibe between us, something I couldn’t quite put a
finger on.

I suddenly felt the impulse to rush into his arms, so I wrapped my
arms around him and laid my head on his chest.

Desperation flooded my heart. I wanted so much to turn the clock
back, to go back to where we’d been before the accident. I squeezed
his neck, moving my head from his chest and pressing my cheek
against his, but he remained limp and listless in my arms.

Dread snaked its way through my belly.

Scott patted my back in an almost brotherly way that broke my
heart, and stepped away.

Before I could ask him what was wrong, Dr. Arch approached us.

“Hey, you two lovebirds,” he said. “Are you ready for the gala
event?”

My stomach rumbled. Despite sandwiches and salad being a far
cry from what the senora had fixed us in Spain during our last show, I
was still eager to eat. “There could be soup, if we’re lucky. Shall we go
help them set up?” I asked.

The tables in the dining room were set buffet-style. There were
deli meats—roast beef, ham, turkey—all on one platter and different
types of cheeses on another. Sliced bread and rolls of all kinds were in
baskets nearby with small bowls of condiments next to them. Green,

Greek, and macaroni salad made up the last of the offerings.

Scott stood next to me as he surveyed the sandwich fixings. “Not a
bad spread,” he said.

I nodded. I was hungry enough to be contented with cold cuts. “I
don’t think there are a lot of restaurants in Golden. Cheryl must have
had a hard time organizing a catering service.”

He nodded absently in agreement as we assembled our
sandwiches.

I glanced toward the door to the dining room, eagerly awaiting my
father and Becca. So far, they seemed to be at least an hour behind
schedule.

“When are they getting here,” I asked.

She shrugged. “Gordon tried to call me a little earlier, but I missed
his phone call,” she said.

I reached into my back pocket to get my cell phone.

“Ah,” Cheryl said, looking at me. “We’ll need to take everyone’s cell
phone away tomorrow, so you better get whatever use out of it you
can tonight.”

“Why are you taking our cell phones?” I asked.

She wiggled her eyebrows at me. “Part of the game.”

Scott glanced at me. “I have poor reception, in here anyway. You
can have mine now.” He took his phone out of his pocket and handed
it to Cheryl.

She waved a hand at him. “No, no. We’ll want to get you turning it
in on camera.”

Scott shrugged. “Have it your way.”

“I’m having poor reception, too,” Cheryl admitted. “Do you think
it has to do with the energy in the castle?” she asked, looking
around.

“You don’t believe any of that stuff, do you?” I asked her.

“That it’s haunted?” She glanced around nervously. “Well, the birds
this afternoon were rather frightening, weren’t they?”

“There is something going on,” I said. “In the air, with the earth.

They probably sensed something and wanted to do a mass migration
out of the area. Believe me, I would join them if I could.”

Cheryl shivered. “It’s freezing in here. We’re going to need to bring
in some space heaters.”

Several cast members behind me in the buffet line started to grum‐
ble. Cheryl waved at me, instructing me to finish loading up my plate,
then scurried off. I took a piece of sliced provolone and put it on my
sandwich and moved on. Scott followed suit.

We found a quiet corner to sit in, but before we could have any
kind of discussion, the ghost hunter, Jack, and his partner, the psychic,
Bert, joined us.

Scott opened the palm of his hand, indicating the chair in front of
us. “Be my guest,” he said.

They sat across from us. “This place is great,” Jack said. “I can’t
wait to have at it tomorrow with my instruments. Tonight, I’ve set up
my EMF by the door. We should see if we have any paranormal
activity by morning.”

“Is Cheryl allowing that?” I asked.

He shrugged. “Why not? That’s what we’re here for. To discover
what’s going on with this castle, discover the story of Jane.”

“I thought we were here to make a TV show,” said Scott.

Bert laughed. “Well that, too, but if we can figure out who killed
Jane, all the better,” he said.

From the adjoining room came some noise that startled most of
the cast and crew who were eating. We all looked up expectantly to
see my father and Becca enter the room. I jumped up and ran toward
them.

Dad was the first one to me, hugging me and lifting me into the
air. “Georgia! How’s it going? Have you already solved the mystery?”
he asked.

I laughed, enjoying the closeness of my father and my best friend.

“Not yet, but I certainly appreciate the vote of confidence.”

Becca smiled. “Y’all have started filming, right? Bring us up to
speed.”

I led them over toward the buffet table. Becca grabbed a paper
plate and began piling sandwich fixings on it.

“Oh, there’s plenty to tell,” I said. I turned to my dad. “Did you see
the blackbirds?”

He nodded. “Weather predictions say flooding in the area.”
“Well, that explains it,” I said.

California had suffered a drought for several years, now rain
would pour in and flood the area. Mother Nature taking care of
business.

Jack overheard us. “No, no. Unexpected blackbird migration is
definite proof of paranormal activity,” he said.

Becca looked at me, a smile playing on her lips. “That’s what I
heard.”

I stifled a giggle.

She squeezed her way between Bert and Jack and placed her paper
plate on the table. Bert seemed to perk up at her presence.

He offered a hand. “I’m Bert,” he said happily. “Robert, but you can
call me Bert. Everybody does.”

She smiled. “I’m Rebecca, but you can call me Becca. Everybody
does.”

Bert beamed. “So much in common already.”

Scott pinched my knee and we refrained from giggling.

Cheryl entered the room, followed by two crew members lugging
some space heaters. She signaled to the far area for them to set them
up, then joined us. She gave my father a chaste peck on the cheek.

“Gordon, I’m glad you made it safely,” she said.

He cleared a spot for her at our table and filled her water glass
with a pitcher that was on the table. Meanwhile, at the next table, I
could overhear Father Gabriel chatting with his partner, Martha, who
seemed fully recovered from her faint earlier in the day.

At their table were Ashley, the castle docent, and Jessica, the grand
niece to Jane.

Father Gabriel said, “The castle should be cleared of evil spirits. I
think tomorrow we should call on Saint Michael to help us.”

“You don’t really believe the place is haunted, do you?” Ashley
asked.

Jessica quirked an eyebrow at her. “Well, don’t you? I mean, you’re
the paranormal docent.”

“Well, I believe,” Ashley said, pressing a hand over her heart. “But
so many people are skeptics.”

Father Gabriel smiled at her. “I am not a skeptic, my dear. I am a
man of faith.”

Ashley’s cheeks flushed red. “Right, right. Of course. I just . . . I
mean, the blackbird stuff. That isn’t proof of anything,” she said.

At the next table, Dr. Arch sat with the FBI profiler, Karen Kenley.
Their heads were huddled together in conversation. I wished I could
overhear them.

I leaned close to Scott and jutted my chin toward Dr. Arch and
Karen Kenley. “What do you think they’re on about?”

He looked over at their table and shrugged. “I don’t know, but I
have to say I’d guess Dr. Arch is probably scheming something. He has
that look about him.”

Becca glanced over at their table. “Yeah, definitely. He’s up to
something. You can tell by his body language.”

Bert twisted around in his seat to look at Dr. Arch.

“Any ideas, Bert? Are you a mind reader along with being psychic?”
I teased.

He turned back around to face us. “No, no. Not a mind reader. But
I am intuitive.”

I smiled. “Intuitive, huh? That sounds like the sensitive type,” I
said, getting a kick out of how he colored.

Suddenly his chin dropped and I immediately regretted teasing
him.

Had I embarrassed him?

Becca waved a hand. “Oh, don’t listen to her. Georgia doesn’t
know anything about sensitivity. She’s the furthest thing from it.”

Now it was my turn to redden.