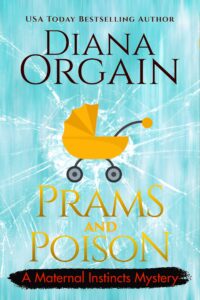 To Do:
1. Take Laurie to puppet time at the library.
2. Furnish twins’ new nursery!
3. Interview prospective nannies.
4. Dinner Saturday with Nick and his wife.
5. Buy larger maternity clothes!
6. Land new paying client.
7. Find out if Hank’s poker night is on the up and up.

“Paula!” I held out my arms to welcome my best friend to my
recently beautified backyard. My wonderful husband Jim had worked
with Jojo—the contractor doing our garage-turned-nursery renova‐
tion—to turn the raggedy, neglected space into an oasis.

Even in the middle of the day, when the string lights draped
between the house and the pergola didn’t cast their fairy-tale glow on
everything, I loved it.

Paula’s jaw dropped as she pushed the pram through the gate and
over the rippling grass. “You weren’t kidding! Jim did such a great job
on this.”

Baby Chloe’s tiny face peeked out of the pram from amid a sea of
polka-dotted blankets, and Paula’s two-year-old Danny trailed behind
them, zooming his toy through the air while making a high-pitched
whirring noise.

Laurie flailed in my arms at the sight of her little friends and
managed to land a painful kick on my growing baby bump.

“Hey!” I said, resting my free hand on my abdomen. “Be nice to
your little siblings, peanut.”

She just wiggled some more.

Paula pulled the pram to a halt beneath the pergola, and Danny
leaped from the stroller, holding his Spider-Man action figure high in
the air.

“I’m Pie-da-Man!” he yelled, throwing out his hand like he was
shooting a web at me.

“Whoa!” I staggered back as if he’d hit me, then sank to my knees
in the grass.

With a grin, Paula pointed him toward a little patch of dirt in the
corner—the garden Jim and I had always intended to cultivate but
hadn’t gotten around to. “Can you play nicely for Auntie Kate for a
second while I go get Paws?”

He stopped and stared up at his mom. Then he yelled, “Pie-da-Man,”
and bolted for the garden.

Paula shook her head and pulled down her huge sunglasses to
glance at me. “I cannot believe what I was thinking, adding a puppy to
this chaos. But oh my word, Kate, I have so much to tell you!”

“I want to hear about that mysterious client you hinted about in
your text,” I called as she retreated toward the gate.

“Back in one minute!” she yelled.

I set Laurie in the corner of the garden, warning Danny sternly to
be gentle and not throw the action figure at her. He ignored me and
banged the Spider-Man headfirst into the sand.

“Good enough,” I muttered, walking backward toward Chloe’s
stroller while keeping a wary eye on Danny and Laurie. I loved
Danny, but he was a rough-and-tumble three-year-old, and I was
always a little worried he was going to knock her over or bite her.

Just as I reached the stroller and unbuckled Chloe, Paula returned
to the yard, her chocolate Lab puppy straining at the leash.

“Paws!” Paula snapped in the warning voice that meant she was
down to her last nerve. “Sit!”

Paws did not sit.

Groaning, Paula pulled the gate closed behind her. “Mind if I take
him off his leash so he can get some of his energy out?”

“Be my guest,” I said, bouncing Chloe and heading back toward the
kiddos, who were happily playing in the dirt. The yard wasn’t huge by
any means—space was at a premium in San Francisco—but Paws’s
desperate desire to run was almost palpable.

Paula unhooked the leash from his collar. The little dog let out a
jubilant yelp and tore around the perimeter of the yard, his tail
thrashing back and forth in unbridled glee.

“He’s trouble,” she said in a wry voice, reaching for Chloe. “I’m
pretty sure he’s going to end up chewing the leg off the couch. And
look at this!” She held out her forearms and showed me a set of four
healing scratches. “These are from his nails! Did you know puppy
claws are that sharp?”

I handed the baby over and sat down in the dirt next to Danny and
Laurie, not caring that I was getting my joggers and oversize sweat‐
shirt messy. Paula, who was wearing dark-wash skinny jeans and an
impossibly fashionable slouchy blazer, stayed standing, several feet
back from the garden.

“So,” I said, tracing a line in the dirt in front of Laurie, “your new
client?”

With a squeal, Paula said, “You will not believe this! I landed a gig as
the designer for a renovation of one of the Painted Ladies!”

Paula had been working hard to build her interior design business,
and the Painted Ladies—a set of Victorian- and Edwardian-style
homes refinished in vivid colors and featured on literally zillions of
postcards—were absolutely iconic.