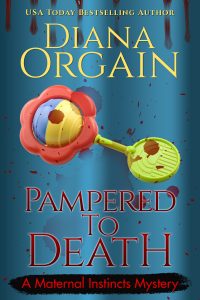 Paula and I entered the sauna, eager to put a little distance
between ourselves and the tipsy bridal party. The women
were all nice enough, but we had come to have a relaxing day, and
they were getting a little rowdy for our taste. We left our swimsuits
on, and I folded my towel and used it as a little extra seat cushion in
the sauna.

“Your tooshie is going to sweat, and you’re going to be sitting in a
puddle,” Paula teased.

“I know,” I said. “But these benches are hard and I don’t have a
better idea.”

Paula followed my lead and sat on her towel too. “So I’m curious,
would you have become buddy-buddy with one of Jim’s exes?”

Paula nodded toward the door of the sauna where just outside the
bridesmaids were all still splashing around in the hot tub like it was a
community pool.

“No,” I said firmly. “Not that he dated any catches before me.” I
winked slightly, and Paula laughed. “I mean, it’s none of my business,
but I probably would have a hard time with that. And those two
seemed really close.”

“Their bond over one man made them sisters,” Paula said and
stuck her tongue out. “I mean, what do they even talk about to one
another?”

“It’s a little weird,” I admitted. “My guess is that Merida didn’t date
the groom for that long. So, anyway, what do you think about the spa?
Maybe Jane North will hire you as a designer. They could use your
help—”

A loud, horrible scream erupted from somewhere inside the spa
stopping our conversation. We bolted out of the sauna, a gust of steam
following us. The bachelorette party looked as stunned as we were, as
they scrambled of out the Jacuzzis and grabbed their towels.

“That sounded like Kelly,” Mrs. Lozano said, panic pinching her
face into a grim mask. She struggled out of the hot tub, and I offered
her my hand.

We all poured out into the hall.

“Where’s Merida?” Paula questioned, and almost on cue, the
woman came hurtling down the hallway.

“What happened?” Merida asked. “I heard a scream.”

“Where were you?” Mrs. Lozano asked “Is Kelly with you?”

The double doors leading into the room where the spa employees
gave facials and massages swung open. Brittany ran out of the room,
towel in hand, as she frantically wiped off a face mask.

The doors burst open and a wild-eyed spa employee dressed in
pink stood shaking before us. “We need a doctor! Is anyone here a
doctor?”

“I’m fine! I’m fine!” Brittany shouted, bursting into tears. “It’s
Kelly! She passed out and we can’t wake her up.” Brittany pointed a
finger at the young spa employee. “It’s all her fault.”

The poor masseuse looked like she was going to fall over in shock.

“I … I didn’t do anything!” she stammered. “Someone needs to call an
ambulance right now!” She darted for the front desk to grab the
phone. She was quickly on the line with a 911 operator.

“Could it be alcohol poisoning?” Paula asked. “She didn’t have that
much to drink, did she?”

“I thought you said she’d passed out!” Merida screamed.

“Well, we can’t wake her and the masseuse said she couldn’t find a
pulse. Go see for yourself,” Brittany said.

The group of young ladies seemed to simultaneously take a step
back.

Paula and I rushed into the room, followed by Mrs. Lozano.

Kelly was lying on her back on a massage table, a green mask hard‐
ening on her face. The scent of cucumber and lime gagged me, and I
covered my nose and mouth with my hand.

Paula took Kelly’s wrist into her hand and searched for a pulse.
Mrs. Lozano stopped shaking the bride and went limp; her shoul‐
ders collapsing into herself. “What am I going to tell Ryan?” she asked.

Outside, the girls were wailing as Jane rounded the corner with an
annoyed look on her face. “What in the world is all the shouting
about? Do I need to cut you ladies off?” she asked