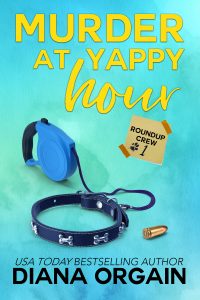 Every neuron in my brain fired off at once, urging me to turn
tail immediately and run out the front door. But the neurons
didn’t seem to connect to any of my limbs, because I remained frozen
like a statue, hoping the woman wouldn’t notice me.

She was slim, wearing a short skirt and stilettos. And, of course,
she spotted me immediately. A small dog appeared from behind her
and began to bark, running toward me, its tiny nails scratching along
the terra cotta floor.

The woman let out a shriek and waved her arms around in a panic.

She stepped over the body and came rushing at me in the dark. She
grabbed my hands, the pink Meat and Greet bag swinging between us.

“Thank God, you’re here,” she said. Then suddenly, she shrieked
even louder and released my hands as if stung. “You’re not Rachel!”

It was a common mistake. Rachel and I had the same athletic build,
were the same height, and had the same heart-shaped face. Physically
we were very similar, but the resemblance ended there.

“Oh! Oh.” The woman shook her head trying to make sense of
what I’d just said, but it seemed too great a task, because she started
shrieking again in hysterics. “It’s Dan Walters. He’s dead. I’m sure of it.
I think he’s dead.”

Dan? The manager at DelVecchio’s? Something tickled at the back
of my brain.

Rachel and Dan had had a fling last summer and she had been
complaining about him recently.

“I came early to meet Rachel. About the fundraiser,” the woman
said, reaching for my hand again and pulling me toward the man
slumped on the floor. “It’s awful. Come see.”

The woman watched me, but didn’t seem to register what I’d said.

“I came in through the back door. I brought the box of flyers.” She
pointed to a box near the body. “Then I saw him.”

I flipped on the bar lights, and suddenly the man on the floor came
into full color—at least the dark-red blood that had pooled around his
head did. He was large, had probably been very tall. He was wearing a
suit and had dark hair that was now matted against his forehead.

The woman and I both recoiled. She began to shriek again. “Oh my
God! Oh my God.”

The woman noticed I’d stopped shrieking and nodded to the
rhythm of my chanting. “Yes, let’s calm down,” she said.

My mind reeled. What had happened? A freak accident or a
burglary gone wrong? Or something else entirely?

“Is there anyone else in here?” I asked.

The woman’s eyes grew wide. “Anyone else? I didn’t. . . you mean .
. .” She stared toward the corridor where the restrooms were. “The
killer could still be here?” she asked in a dramatic stage whisper.

I stared at her, suddenly nervously aware that she’d been standing
over Dan when I’d arrived.

Indeed. I could be looking at the killer

A humming sound filled the room, causing us both to jump, and
the dog, a Yorkshire terrier, to bark.

It was the refrigerator coolant system kicking on.

Something warm and wet hit my ankle. I gasped at the sensation
and looked down. The small dog barked excitedly at me.

The woman laughed nervously and bent to scoop him up. “Beepo!

Naughty, naughty.” She turned to me. “I’m so sorry. Beepo’s never
done anything like that before in his life!”

Beepo eyed me with his big, brown, watery eyes, in that way that
dogs have that made me feel like he could read my mind. He’d known
that for a split second I’d suspected his owner of something heinous.

The woman pressed the small dog to her chest. “We must call the
police,” she said, continuing on with her theatrical whisper.

I figured if no one had rushed out of the restrooms at us, then we
were probably alone with the body. I moved around to the back of the
bar and released the Meat and Greet bag onto the floor. I grabbed the
phone and punched in 9-1-1, then snatched a bar towel and wiped my
ankle.

The 9-1-1 operator answered. “What is the nature of your
emergency?”

“We need the police over at The Wine and Bark immediately,” I
said, tossing the soiled rag on the floor.

“Oh? Rachel? This is Jen. What’s happened? A robbery?” the oper‐
ator asked.

Even though Pacific Cove was a small town, I’d barely met anyone
in my few weeks here. Rachel, on the other hand, probably knew
everyone in town, even the 9-1-1 operator, it seemed.

“Not Rachel. This is her sister, Maggie. We have a dead body here.”

The operator gasped. “A dead body? Are you sure? Did you check
for a pulse?”

I looked up at the woman who was hovering by the door of the
bar. “Did you check for a pulse?” I asked.

She shook her head.

“No,” I admitted into the phone.

“Check for a pulse. I’ll hold,” the operator said. “Can you check for
a pulse?” I called to the woman. She gasped. “Oh no! I’m not touching
him.”