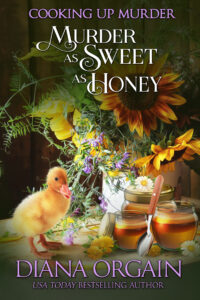 Was that gel in his hair? Leo never paid much attention to how he
looked, but today his hair was slicked back and he looked downright
dashing in his well-fitted button-up.

Vicki closed the door and led Leo into the kitchen. He looked
around and seemed to deflate a little. “Just us?” he said. “Mona’s not
here?”

Vicki bit back a grin. So that was why he’d taken a little more time
with his appearance. “She couldn’t come today. She got tied up
waiting for the construction manager at the store. That rebuild has
been a headache and a half.”

“Oh, did that Mark guy not work out? The contractor?”

“Lunch is almost done. Cornbread will be out of the oven in fifteen
minutes.”

“Everything okay?” Leo asked after a long pause, studying her.

Vicki bustled to the stove and tasted the stew to check how it was
coming along. Savory and delicious, just like the recipe had promised.

“Aww, were you worried about me?”

Leo could read her better than anyone, and he always did feel like
he needed to protect her. Plus, after what had happened with her last
boyfriend, that big-brother instinct wasn’t going away anytime soon.
Not to mention that he was a cop and ex-military, she thought wryly.
No, there would be no dissuading him from the idea that he needed to
keep an eye on her.

Leo just shrugged, then peered through the half-open window at
the fluffy, white duck. “Hey, Sunny,” he said, tapping the glass pane.

“So, can I call you a crazy duck lady?” he asked with an amused
grin.

Vicki rolled her eyes. “Very funny. As a matter of fact, I have news!”

She sang the last word.

A huge grin overtook her face. “We’re in the Fall Festival! Mona
and I snagged a booth!”

“Bam!” He gave her a high five. “That’s amazing! As soon as you
said that awful chair lady wasn’t in charge anymore, I knew you’d get
in. You’ll outsell all the other vendors.”

Vicki warmed at the compliment. “Well, it’ll definitely be a lot of
work to put it all together, but I’m excited about the challenge.”

His nose wrinkled. “So, is that why it smells like a candy cane
factory exploded in here? New product?”

“Oh! I was just putting the finishing touches on my energizing
body scrub. Aunt Bee practically commanded me to bring samples to
Coupon Clippers tomorrow. I tried some right before you got here.”

He eyed her suspiciously.

“What are you laughing at?” She crossed her arms.

Leo pointed to her arms.

She looked down and gasped. They were bright red! How . . .

The spilled peppermint oil. She must have spilled a lot.

Her hand flew to her mouth, and she burst out laughing. “Guess I
put a little too much peppermint oil in this batch.”

“It burned when I put it on, but I washed it off right away. Feels
fine now.”

His lips quirked in amused concern. “Seems like you could use
some help.”

That unexpected anxiety curled in her stomach again. Yes, she
needed help. Because if she couldn’t get this business off the ground, it
was back to the soul-sucking days in the courtroom. But she turned
on a cheery smile. “Would you like to sample the next batch?”

Leo scoffed. “No way. I can’t go into work looking like I have
second-degree burns. They’d stick me at a desk.”

“Just tell them it was one of your crazy sister’s concoctions,” said
Vicki with a grin.

“The guys understood that was my fault, right?” She affected an
innocent face.

“Didn’t stop them from calling me Grinch for the next two days.
No,” he said, leaning back against the counter with his arms crossed.

“I’m done being your guinea pig. Find someone else to torment.”

“You know you’ll help me out in a pinch.”

“That’s what brothers are for!”

Leo laughed and reached out to mess up her hair like she was still
twelve. He’d have her back no matter what, and they both knew it.

“All right,” he said, “I’ll help. Besides being your guinea pig or
dumping out all your peppermint oil, what can I do?”

“Well, as you know, I learn from my mistakes, so . . .” She glanced
at the clock again. “I think we have just enough time before the corn‐
bread comes out. I’m going to whip up another batch of the ener‐
gizing scrub. Could you grind up the fresh ginger root and
astragalus?” She pointed to some dried herbs on the counter.

“Sure,” said Leo, grabbing the herbs. He ground them with a
mortar and pestle while Vicki mixed the oils, honey, and salt.

“Hope you didn’t accidentally add peppermint to the cornbread,”
he quipped.

With a snort, Vicki said, “The cornbread came straight out of the
box, as God intended. I only added milk, butter, eggs, and a little
honey from my hives. But I made the stew from scratch, so that’s what
you should be worried about.”

“I’m terrified to try it,” he replied dryly. “So, Aunt Bee roped you
into Coupon Clippers?”

Vicki reached into the bowl to test the consistency of the scrub,
her nose twitching. “Yeah, maybe a month ago. You try telling Aunt
Bee no when she puts her mind to something.”

He laughed aloud. “I wouldn’t dare.”

Technically, Bee was Mona’s aunt, but pretty much everyone called
her Aunt Bee. The formidable woman always meant well, but her
chief joys in life were clipping coupons and giving opinions. Lots and
lots of opinions.

“She wouldn’t take no for an answer, and said”—her voice took on
an affectionate mimicry of Aunt Bee’s dramatic warble—“I know you
need to start pinching pennies, especially after the fire.”

“She did,” Vicki groaned, affecting wry horror so that Leo wouldn’t
see the panic rising in her throat. If this business didn’t work out,
she’d have to go back to being a lawyer.

That wouldn’t be so bad, right?

But she couldn’t even convince herself.

She took the herbs Leo had ground and started mixing them into
the scrub with a vengeance. She’d just gotten so tired of seeing crimi‐
nals go free. She wanted to live a quiet, happy life with her duck and
her bees. That sounded like some real peace. Way better than working
in the court system. The thought of going back to lawyering
exhausted her all the way to her bones.

No. She wouldn’t have to go back to being a lawyer. She’d pinch
pennies, in Aunt Bee’s words, until she made this business work.