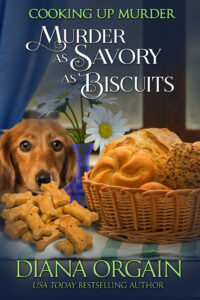 Not exactly the way I was hoping our first date would go,”
Mona said under her breath, looking anywhere except at
the body in the brush.

Leo nodded, sighing heavily. He’d just gotten off the phone with
dispatch, and they were sending a crime-scene unit. The dog whined,
not budging from the man’s side.

Yup, this year sure had brought a whole spree of bad luck to the
town of Magnolia Falls. Their small community hadn’t seen a murder
in ten years, and then an arsonist had burned down Mona’s store,
killing someone in the process. Just a few months later, a pair of
selfish siblings had murdered two people in a bid to keep themselves
from being disinherited, and Leo’s sister Vicki had been caught up in
the middle of the investigation.

And now he’d found a body in the woods.

The dog pushed his nose into the man’s face and whimpered
mournfully.

“Come here, boy,” Leo said, worried the dog was going to contami‐
nate the crime scene. The dog whined again and limped over to Leo.

Leo bent down next to the retriever. Its face was covered in blood.
From the dead man, maybe? The dog had been sniffing around him
quite a bit. But upon further examination, he found a stab wound in
the dog’s front right leg.

“You poor thing!” Mona cried, kneeling. The dog’s tail thumped
half-heartedly. While Mona fawned over the injured dog, Leo took
another look at the body. What he saw chilled him to his core, and a
protective instinct rushed over him.

“Oh my gosh! Mona, stay away from the dog!” he snapped, spin‐
ning around. The retriever was lying on its back, and Mona was
rubbing its belly.

Mona furrowed her eyebrows like he was crazy. “You think this
sweet little guy killed him? There’s no way.”

“Mona, I don’t know, but it kinda looks that way. Please, just back
away from the dog.”

She crossed her arms and stood up. “There’s no way this dog killed
that guy.”

“Leo!” a voice called from beyond the trees.

“Over this way!” Leo called back, waving his arms as a handful of
officers from the station’s crime-scene unit trudged past the tree line.

“This dog is sweet,” Mona insisted, still rubbing the retriever’s
belly. “If it hurt that man like that, it wasn’t the aggressor. Maybe the
guy was the one who stabbed him or something.”

Leo eyed her, then turned and shook hands with his fellow officers
and briefly explained how they’d come across the scene.

One of the younger officers, Reynolds, squinted toward the body.

“I could have guessed that from the suit,” Leo said.

“Oh, I know the name,” said Officer Truff, the oldest member of
the group. “He’s new to town, isn’t he?”

“Yeah,” said Reynolds. “Well, sort of. He’s from Pigeon Hollow
originally. Lives somewhere in the county. I’ve heard it’s a big estate,
but I don’t know where it is. But he just bought that big lot on the
edge of town for his factory. What are they making? Boots or
something?”

“Speaking of which,” Mona said, stepping into the circle of officers.

“What’s a guy doing dressed like that in the middle of the woods?”

“Probably not hiking.” Leo crossed his arms. “The dog does seem
to know him, though.”

“Doesn’t take a genius to see that the dog bit him and that he bled
out,” Reynolds said. “Dog’s gonna have to be put down.”

“Seriously?” Reynolds questioned. “The dog is covered in his
blood, and that wound on his neck is obviously a bite mark.”

Mona put her hands on her hips. “This dog didn’t bite him!”

Reynolds shot a questioning look in her direction. “Unless the
autopsy results show something crazy, it seems pretty straightforward
to me.”

“No, it doesn’t,” Mona retorted. “The guy’s in the middle of the
woods in a suit. No one walks their dog like that. Look at his shoes. It
doesn’t make sense. And someone even stabbed the poor dog in the
leg.”

“I don’t know,” Officer Truff said, his eyes kind. “If I had to guess,
the dog attacked the victim, the victim stabbed back in self-defense,
and its owner ran off when they realized their dog had killed the
man.”

Mona’s hands shook, and she bit her lip like she might be about to
burst into angry tears.

“Okay, let’s slow down a bit, fellas,” Leo said. “I think Mona might
have a point. The scene is odd, and the dog hasn’t shown any signs of
aggression. Let’s be sure we do a thorough sweep of the scene.”

“What about the dog?” Reynolds asked.

“I guess we take it to the pound after we get a cast of its mouth to
confirm whether or not it actually bit the victim,” said Truff. “Then,
after the autopsy, we’ll know whether it needs to be put down or not.”

Leo sighed and glanced from Mona to the crime-scene unit to the
retriever. He surprised himself with the next words out of his mouth.

“I’ll take the dog. It needs to be seen by a vet, and there’s one near my
house.”

Reynolds stared at him, agape. “You’re really going to watch this
dog while this case is being investigated?”

Truff shrugged. “Let me check in with the chief and see if it’s okay
for the dog to come home with you, but he’ll probably be glad he
doesn’t have to deal with the idiot who runs animal control. You three
start on the crime scene, and I’ll head back to the cruiser and radio the
chief.”

Leo looked down at the retriever. It was lying on the ground, head
propped up on its front paws, occasionally letting out a soft whine.

Panic flared in Leo’s chest. What had he just committed to?

But then Mona threaded her fingers through his and squeezed his
hand. A giddy smile flashed across his face.

This would be fine. This had been a good idea. If the dog was inno‐
cent, they couldn’t very well let it be swept off to the pound. It might
get euthanized prematurely there.

Mona sat next to the dog and rubbed its ears, murmuring in
soothing tones. Though Leo kept a sharp eye on the retriever for any
signs of aggression, it just lay there, its tail occasionally thumping
from side to side.

A few minutes later, Officer Truff reappeared on the path,
shooting Leo a thumbs-up. “You’re good to take the dog,” he called.
“Just wait a few minutes for the forensics team. They need to swab the
blood on the dog’s fur and take a cast of its mouth.”

When the forensics team arrived, they did their job quickly and
efficiently, and the dog appeared no more aggressive even when three
people were poking and prodding him and prying his mouth open to
take the cast.