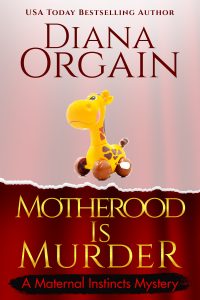 The boat swayed, the motion brought my mind back to the
present.

I still needed to call Mom. How could I find a network? I extended
my arm and did a ridiculous dance trying to coax more than two bars
out of the phone.

I quickly dialed home. All I could see in my mind’s eye was

Laurie’s pretty round face with her rosy cheeks and toothless grin.

Thank God I’d pumped before leaving the house this evening. I only
hoped they wouldn’t keep us here too much longer. I was missing
Laurie like crazy.

I twisted and suddenly saw full bars. Mom answered on the third
ring.

Samba music blared in the background, then suddenly stopped.

“What are you listening to?”

“Laurie is sleeping through Ricky Martin?”

I filled Mom in on the developments.

She gasped. “Don’t worry about Laurie and me, we’re fine. Just
take care of whatever you need to. We’ll be here.”

What would I do without Mom?

As I was about to thank her and hang up, I heard a male voice in
the background. “Who’s that?”

“Oh! That’s Hank. He came over to keep me company.”

After nearly fifteen years of being single, Mom had recently
started dating again. Hank was the man who’d brought her out of
hiding.

“What are you, a teenager? You have some guy over as soon as the
adults are out of the house?”

Mom laughed. “I needed somebody to samba with and Laurie just
wasn’t cooperating.”

From the main staircase four police officers in uniform descended.

They wore solemn expressions and walked in lockstep.

I returned to our table, where Jim and my, no doubt, cold coffee
were waiting.

Upon reaching the bottom of the stairs, the officers dispersed.

Each one approached a different table, the divide and conquer
method.

The officer that came to our table was Asian-American. He had a
strong compact build and a smooth complexion. He leaned forward,
his hands resting on the tabletop, and cleared his throat. “Evening,
ladies and gentlemen, I’m Officer Lee. Sorry about the delay. The
captain wants to dock as soon as possible, but before we can let you
all go—I need to get a statement from each of you and some contact
information.”

Officer Lee focused on Margaret and sized her up, nodding to
himself several times. “The medical staff is with her now.”

He meant the medical examiner, I was sure of it. But I supposed

SFPD had a reason for not disclosing that. I hadn’t had an opportunity
to mention to anyone that I had bumped into the ME. Now, I felt
certain I should keep it to myself.

Except, of course, for Jim.

Reflexively my hand reached out to touch Jim’s leg. He placed his
hand over mine and gave it a reassuring squeeze.

Officer Lee straightened and pulled out a notebook from his
breast pocket. “I’d like to begin with you,” he said to Margaret. “Please
follow me.”

Margaret gave the napkin in her lap one final wring, then stood
up. Her tutu sprang to attention.

Officer Lee seemed momentarily dazed by Margaret’s attire. He
gathered himself enough to mumble, “If everyone can please get their
identification cards or driver’s licenses ready, it’ll make this whole
process go much smoother.”

Margaret followed Lee toward the lounge area, where they carved out
a private space to speak. The rest of us at the table exchanged sympathetic
looks and began to gather up purses and wallets to prove our identity.

Evelyn craned to look out the starboard windows. “Where’s the
hospital boat? Why aren’t they shuttling her off the boat?”

“Maybe she’s not hurt all that bad,” Sara offered.

“Then why are the police here?” Evelyn shrieked.

Evelyn’s husband put his hand on her shoulder. Evelyn sat up
straighter and pushed her belly out.

Sara gave Evelyn the evil eye. “How should I know why the police
are here? Maybe all this has something to do with you!”

“Me!” Evelyn said, pressing her hand to her heart.

She shrugged him off. “Why did you even come on this cruise?”
she said to Evelyn. “You aren’t a member of Roo & You anymore. I’m
sure Helene made that clear to you!”

Evelyn’s face flushed bright red. A lock of blond hair slipped from
her barrette and fell across her face; she fiercely brushed it aside, then
jutted her finger out at Sara. “I saw you and Helene arguing at the top
of the stairs. I saw you. I saw you fighting!”

Indignation crossed Sara’s face, but before she could reply, her
husband noisily pushed his chair back from the table and stood.

“Come on. We don’t need to sit here and listen to this.”

Sara seemed torn. She looked as though she wanted to stay and
fight with Evelyn, but couldn’t find the courage to stand up to her
husband.

She pressed her lips together as her husband grabbed her arm. She
stood and glared at Evelyn, then walked with him to the lounge area.

Evelyn’s husband, Fred, patted her arm. “Honey, don’t upset your‐
self or the baby.”

Our table fell into silence.

I remembered Sara, Miss No-Nonsense, in the bathroom and how
disheveled she looked. Why had her dress been wet?

I imagined Helene throwing a drink at her and Sara pushing
Helene down the stairs.

Jim leaned close to me and whispered, “I didn’t know we’d get to
see fireworks on this cruise.”

“And we didn’t even have to pay extra!” he continued.

One agency or other was always advertising firework displays on
the San Francisco Bay, whether it was after a ball game or during a
dinner cruise. Usually there was an extra charge at those events.

I shook my head at him, conjuring visions of the medical examiner
hovering over a pasty Helene.

Fred leaned in toward Evelyn. “What did she mean, you aren’t a
member of Roo & You?”

Evelyn flicked her hand about as though to distract us or at the
very least indicate to her husband to move off the topic. “I saw Helene
and Sara bickering at the top of the staircase that Helene fell down.”

“Over what?” Fred asked.

Margaret and Officer Lee approached our table. Evelyn fanned her
hand at Fred, silencing him.

Margaret reached her chair and seated herself, tucking in her tutu
around her. Lee scanned the room. I followed his gaze, which settled
on Sara and Howard arguing in a corner of the lounge. I turned back
to face Officer Lee, only to see him leave our table and head toward
Sara.

Margaret’s lipstick had faded to nothing and her eyes looked
drawn. I glanced at my watch. It was well past midnight now and I
was feeling sapped. With Margaret’s return, the table had fallen into
silence and I longed to be alone with Jim.

Jim wrapped his arm around my shoulder. “Are you cold, honey?

You want me to get you some hot coffee?”

We stood to leave and ended up taking orders from our table for
hot teas and coffees. As we made our way to the bar, I noticed that
several passengers were speaking with officers at strategic locations
throughout the dining and lounge area. One silver-haired woman was
speaking animatedly with a female officer. She was gesticulating
wildly while the officer scribbled notes on a notepad.

I tried to eavesdrop on their conversation, but Jim was walking too
fast. At six foot two, Jim has serious long legs, so they don’t even have
to be moving all that fast to leave me in the dust. I pulled at his arm to
slow him down.

He stopped walking and smiled at me. “Sorry, honey.” He kissed
me. “It’s terrible about your friend. I hope she’s okay.”

“She’s not. When I called Mom, I bumped into Nick Dowling,” I
said.

Jim paled. “Does his being here mean Helene is—”

“Does anyone else know?” Jim asked.

I shrugged. “Well, I suppose the cops do and I’m sure Margaret’s
podiatrist husband knows. Right? I mean even though he’s —”

“Okay, okay. I know a podiatrist can be a doctor. I meant, do you
think anyone at our table knows?”

“I think they all know a podiatrist can be a doctor.”

Jim shook his head at my bad joke. “Do they know about Helene?”

“Well, don’t say anything, all right? It looks bad that the ME is
here, but we don’t know anything for sure, right? So let’s not say
anything and get anyone more upset than they already are.”

I nodded in agreement. We reached the bar and placed our order.
Officer Lee appeared next to me.

“Mrs. Connolly, I’d like to have a word with you next.”