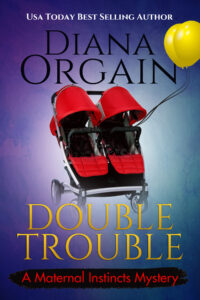 “Ladies and gentlemen, boys and girls!” called Paula, standing on an upside-down bucket in my living room. “In five minutes, we’re going to have the gender reveal for the twins! Everyone start thinking about making their way into the kitchen. David is arriving with the cakes any moment.” She placed her hand dramatically over her chest. “I was starting to worry the bakery wasn’t going to finish them in time!”

From across the room, I made mournful eye contact with Jim. Paula’s idea for a gender reveal was a pair of cakes—cupcake-sized, I hoped—that she wanted Jim and I to smash into each other’s faces like an enthusiastic bride and groom at a wedding reception.

The idea didn’t thrill me . . . but Paula had been so enthusiastic, and it seemed easier to play along.

I was too pregnant to argue.

Our house was packed out with friends and family. My mom and her boyfriend Galigani sat on the couch in conversation with Jim’s brother, George, and George’s wife, Kiku, who was holding her little one. My dad and stepmom stood near the doorway to the kitchen with Deb, my policewoman friend. Laurie shuffled across the floor, chasing Paula’s toddler son, and our poor cat Whiskers hid under one of the couches evading Paula’s nine-month-old-daughter Chloe.

A knock sounded at the door, and I opened it to find my friend and rival PI, Vicente Domingo and his cousin Baramendi, with Sergeant McNearny a step behind them.

“Sorry we’re late!” Baramendi said. “We were just wrapping up a few loose ends at work.”

Vicente shrugged sheepishly. “Kate knows how it is,” he said. “Sometimes you just can’t break away from an important case.”

“Oh?” I raised an eyebrow, suddenly intrigued. “Anything I can help with?” I asked against all my better judgment.

McNearny scowled at me, though there was a grudging respect in his eyes. “Not a chance, Connolly. You’re on maternity leave, remember? Galigani said you told him yourself that you didn’t want any cases for a few weeks.”

“That’s right,” Galigani piped up from his position on the couch.

“I know, I know,” I grumbled, waving them inside. “I’m just not a hundred percent sure I meant it.”

Vicente chuckled, and the group joined us inside.

McNearny grumbled, “Connolly, with your uncanny sense of timing, there’ll probably be a murder in the hospital while you’re giving birth.”

From across the room, Deb yelled, “I heard that, Sergeant! Don’t you be giving Kate a hard time now.”

The sergeant muttered something unintelligible in my general direction. He still wasn’t thrilled that I’d hired his niece as our nanny—but it seemed like he was starting to get used to the idea.

A shrill baby scream broke over the party noise. I whirled, my heart jolting to a gallop, to see Laurie sitting on her bottom in the middle of the living room, her face crumpled in a deep sob.

“Ooooh!” I cooed as I swooped toward her and eased myself to sit at her side. “What’s wrong, little duck? Don’t cry at your own birthday party, sweet girl!”

Laurie threw herself into my lap with a guttural sob.

“Oh, honey,” I murmured, stroking her back. “Did you fall down?”

Paula’s three-year-old peeked out from behind Rachelle’s legs, his wide-eyed expression giving him away.

I crossed my arms and trained a stern stare on him. “Danny,” I called in a commanding voice. “Did you make her cry?”

Danny bit his lip, then took a small step forward and pulled a stuffed duck from behind his back. “Sorry, Laurie,” he said, holding out the duck.

I accepted the duck from Danny and handed it to Laurie. She grabbed it and clutched it tightly to her chest.

Laurie just studied Danny dourly, and I suppressed a snort. I hadn’t expected Laurie to actually repeat the words, but her expression clearly communicated that she did not forgive him.

The door opened, but I ignored it, focusing on negotiating a peace between the two children. “Danny, can you—”

Someone jostled my arm, and I looked up sharply. My eyes widened. Paula’s husband had arrived with the cakes. And . . .suddenly a delighted baby Chloe zipped across the floor to greet her father.

He was tripping, falling, windmilling his arms with panic in his eyes.

The world slowed down as the cake boxes flew toward the ceiling, flipping over in midair and dumping a pair of bigger-than-cupcake-sized white-frosted cakes directly above our heads.