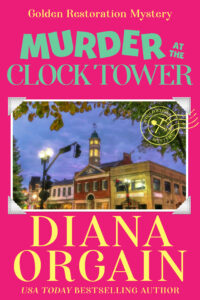 I knew this would happen eventually. For the last two days, I’d been
surviving on eggs and potato chips, in denial of what needed to be done:
a grocery run. I’d stuffed my bags with enough food to avoid having to
leave the motel until after the committee meeting, but now the meeting
had been pushed back a week, and I was down to one slice of bread and a
half-empty jar of mayonnaise. I was in a rather unfortunate predicament.

“An extra fifteen minutes just to get off the freeway….” I mumbled.

Looking at the time, I knew that fifteen minutes was an understatement
given the traffic outside of town. Golden might have been a small town,
but larger cities with heavy traffic surrounded it. I was bound to get caught
up in an early lunch rush.

“Am I going to drive thirty minutes to avoid bumping into anyone I
know?” I asked aloud, staring at the keys in the little bowl by the door.

“Maybe I could just grab lunch at that sandwich shop again…” But I didn’t
need to spend frivolously when I wasn’t sure I’d land the clock tower
renovation job.

The tiny one-bed motel room had been more than enough in the past
two weeks, but it was already beginning to feel cramped. Sooner or later, if
I managed to get the job, I would have to get some sort of rental closer to
town.

Maybe I should go to town for groceries, pick up a local paper while I’m
there. See if there are any rooms for rent…

“Nah,” I said, at last, snagging my keys from the bowl and my purse from
the bedside table. As I made my way to where I had parked the evening
before, I had an obnoxious thought.

Do you really want your first time in town to be the day of the
committee meeting? What if you have some sort of panic attack or
something?

“Dang you, inner-dialogue,” I said. But it was a serious concern I hadn’t
considered before. There was a reason I hadn’t returned to Golden in so
long. The very thought of going back into town had me hiding just outside
its borders in a motel near the freeway.

I stood at the driver’s side of my white Porsche, staring at the dent and
bright blue line just below the handle where I was side-swiped not thirty
minutes after buying it.

I’d wanted a Porsche since I’d been a teenager, and I always thought
that it would be my “I made it” moment if I had reached that goal. That
moment had me jumping out of the car thirty minutes later, shouting at a
woman who had broken down in tears over it. I’d never lost my head like
that before, and I felt terrible for reacting the way I had. My “I made it”
moment had been soiled, not because of the accident but because of how
I responded to it. I’d harbored so much rage for so long that it finally
exploded on some poor woman who hadn’t yielded at a roundabout.

So, I left the damage.

It was a reminder not to let myself get dragged too far into the world of
money games again. My materialist ways had taken a hit for me, and
ironically, the shape of the blue from the other woman’s car… looked like
the Clock tower.

Perhaps that was really what sent me over the edge?

Truthfully, I hadn’t been angry until after I had seen the image of the
Clock tower staring back at me, forcing me to think about Golden for the
first time in a while. The accident had only been a few weeks ago; I had
gotten the call from Tori only a few short hours later, asking me about the
clock tower. It was as good for a sign as any that it was time for me to visit
Golden again.

Even if it was only temporary.

I exhaled, yanked open the car door, and jammed myself in the driver’s
seat. “Golden,” I muttered, putting the car in reverse and pulling out of the
motel’s parking lot. “Can’t believe I’m going to Golden… for groceries, of all
things….” I gripped the steering wheel until my knuckles turned white.

The motel was a reasonable distance from Golden’s grocery store, and I
prayed I’d be lucky enough to avoid anyone from the past.

Five years was a long time to be gone from a small town like Golden.

I checked my reflection in the rear-view mirror.

I had grown my hair out, and I didn’t have highlights before. It was more
of an LA style now; long, curled, and generally well kept. Not the traditional
ponytail and ballcap some of the Golden women wore.

Maybe if I see someone I know, they won’t recognize me…

I glanced over in my passenger’s seat to the sunglasses and sunhat I’d
worn the day I’d met Tori. I snagged the sunglasses, putting them on
before pulling into the parking lot of the grocery store. It was a small
mom-and-pop store that ran a pretty big risk of attracting other locals, so I didn’t
want to take any chances. Once parked, I put the hat on and double-checked
myself in the mirror, pulling it down to shadow more of my face.

“Nothing like the Hope Wilson who left five years ago, I’d say,” I
muttered to myself, taking a deep breath and climbing out of the car. My
phone buzzed. It was Tori, and I huffed as I answered it. “You better not be
calling me to tell me they postponed the committee meeting again. Or that
you made the whole thing up to get me in Golden! Because if you are, I’m
going to teepee your house before I speed back to LA.”

Tori laughed. “No, nothing like that. And, careful, don’t work out my
diabolical plans just yet, please.”

“I’m just checking to see how you’re doing. I know you weren’t expecting
to have to wait around a whole other week, but Revival wanted more time
after they heard we had someone else giving a proposal as well,” Tori
explained. “Sounds like your name ruffled some feathers when I talked
with their rep. It looks like Revival isn’t the only architect around here with
a reputation.”

“Sounds like they don’t know what they’re doing if they’re intimidated
by Hope Wilson,” I teased. I entered the shop, pulling my hat down
another inch just to be on the safe side. “You weren’t talking me up to
everyone, were you? If this doesn’t pan out, I’d rather not get stuck having
to meet a bunch of people who want to play catch up.”

“You still just hanging out at the motel trying to avoid everyone?” Tori
asked, and I cringed.

“If you must know, I have left the motel,” I said. “Had to do a grocery
run, and I’m officially in Golden.”

“Err…” I muttered, grabbing a grocery cart and making my way down the
first aisle.