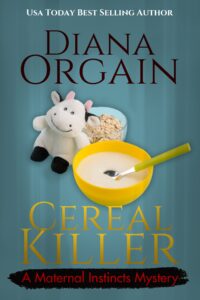 I KNOW WHAT YOU DID. MAYBE ITS TIME TO GIVE UP YOU’RE
GRAPES OF WRATH.

“Well,” I murmured. “They’re referencing a classic novel but made
a mistake on the difference between your and you’re.”

“I noticed that,” said Luz with a dark chuckle. “They missed the
apostrophe in it’s, too.”

Vicente and I traded papers, and I read the other note.

HOW ABOUT A MIRACLE? TURN THE WINE INTO WATER.

It was printed on the same type of paper. No spelling errors in this
one, I noted—but another allusion, this time to a Bible story. And this
one explained why Luz had flinched at Gloria’s water-and-wine
remark a few minutes earlier. It had been an unwelcome reminder of
the strange notes.

Glancing toward Luz, I asked, “And what did they send today?”

Wordlessly, she passed the last piece of paper toward me.

LIGHTS OUT. CLOSE DOWN THE WINERY OR ELSE.

My eyes widened. “They’re all disconcerting, but this one reads as
a more direct threat. They didn’t even bother to try to be clever with a
literary reference.”

“Let’s start thinking through some suspects, so we have a place to
begin investigating,” I said. “Vicente thought maybe your ex has some‐
thing to do with it?”

Luz traced the edge of the table. “It is easier for Vicente to think
that Thomas is involved than it is for me. Thomas is many things . . .
Vicente always hated him, even when we were all children. Vicente
and I spent several summers here together.”

“You can say that again,” Vicente muttered. “He’s a weasel.”

She ignored him and continued, “But I have a hard time imagining
he would go this far. He wants us to be together. Sometimes he has a
terrible way of showing it. But I don’t think he wants me to shut
down the vineyard or anything.”

“Is there anyone who might want you to shut down?” I pulled out
my trusty legal pad and scribbled a few notes.

“I’ve thought a lot about it, of course.” She paused, pulling down a
glass from a shelf and uncorking a bottle of wine. “I’m so sorry, I just
need to settle my nerves. As far as other suspects go . . . I did have a
manager, Bruce Stringer, whom I fired a few months ago.”

“You fired Bruce?” asked Vicente, leaning forward, a new intensity
in his eyes. “Why?”

Luz took a sharp breath. “It was after the rolling blackout. We’d
decided together to buy grapes from another vineyard, and I told him
to mark those barrels of wine. When the wines came of age, we were
going to use those bottles to fulfill our contracts, but . . . I was not
comfortable pretending the wine was made from our own grapes. But
Bruce didn’t label the barrels . . .”

Vicente sucked in a sharp breath. “Why didn’t you tell me?”

She buried her face in her hands. “Because I was complicit, too,
and I didn’t want to make excuses for my own behavior. When I
confronted Bruce about it, he . . . laughed at me. He told me this
wasn’t the first time he’d done this . . . that our wine that came of age
this year is also mixed, that he’d bought other grapes before. We won
an award for this year’s wine! It was only a small one, from a local
harvest festival. But there’s no way to know if the award was for wine
made from our grapes or someone else’s.”

“I was incensed.” She took a sip of wine. “I left a message for the
head of the committee asking her to call me back. But before she did, I
found out that the press release had already been sent out. It was a full
story in the local paper and a small item in a couple of national wine
magazines.”

My heart went out to her.

She raised her head, tears brimming in her eyes. “And I panicked.”

Her voice squeaked. “A retraction like that would call into question
the credibility of my whole operation. No one would trust my label
anymore. So, when the head of the committee called me back, I just
said that I’d wanted to thank her. I . . . went along with Bruce’s decep‐
tion. And I’m still going along with his deception, because I have no
way to distinguish which barrels of wine are really from Castillo’s.”

“What a mess,” Vicente said.

“So, don’t you see? It would be a lie to put the blame on Bruce. I
hate everything about the situation, but the fault is mine. I own this
label, and I was too afraid to come clean and make it right.”

Understanding flooded me. “You didn’t want to tarnish your
grandparents’ good name,” I said.

Our eyes locked, and she nodded. “Yes. I was afraid of the financial
consequences, of course. Afraid that I wouldn’t be able to take care of
abuela as she ages, but more than that . . . I didn’t want to ruin her
legacy or have to see how disappointed she was in me.”

Vicente opened his mouth, then seemed to think better of what‐
ever he’d been about to say.

“So, you fired Bruce after you found out about the award?” I asked.

“Yes,” she said, wiping away her tears. “Immediately. He was . . .
angry, but I didn’t think he seemed angry enough to take revenge, or
anything. But with everything that’s happened, I’m second-guessing
that.”

I flipped the page on my notepad. “Were you worried he’d go to
the press or sue you or take the dispute public?”

“Not at all.” She took a long sip of her wine and chuckled darkly.

“He’s already gotten a job as a manager at another winery, so he still
works in the industry. If the story became public, I’d lose my credibil‐
ity, but so would he.”

Vicente began pacing back and forth. “So, if he wanted revenge,
he’d have to do it this way—with threats and sabotage, not by publicly
shaming you.”

An oppressive silence fell over us.

“Well,” I finally said, setting down my pen. “For now at least, Bruce
seems like our best suspect. Based on the notes, it seems like the sabo‐
teur knows about what happened with the grapes.”

“Thomas knows about the grapes, too,” said Luz.

Vicente snapped toward her, astonishment on his face. “Why . . .
why would you give him that kind of ammunition against you? Luz!”

But she kept her focus on me, refusing to meet his gaze. “I didn’t
know who to turn to. Thomas and I have a lot of history.”

“You can say that again,” Vicente muttered.

She took a deep breath. “The day after I fired Bruce, I ran into
Thomas in town, and he asked me how I was doing and . . . I burst
into tears and the whole story spilled out.”

Vicente stalked back toward us. “Why, that no-good weasel, I’ll—”

I held up a hand. “Let’s not jump to conclusions until we’ve done a
little more investigating. Both of these men seem like viable suspects.
We need a plan of—”

The lights flickered and then went out, plunging us into darkness.