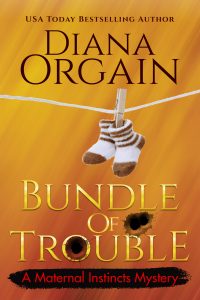 I’m so excited to share with you the first chapters in Bundle of Trouble. It’s one of my best-selling mysteries and I hope you enjoy reading it as much as I enjoyed writing it!

The phone rang, interrupting the last seconds of the 49ers game.

“Don’t know,” I said from my propped position on the couch.

I was on doctor’s orders for bed rest. My pregnancy had progressed with practically no hang-ups, except for the carpal tunnel and swollen feet, until one week before my due date when my blood pressure skyrocketed. Now, I was only allowed to be upright for a few minutes every couple of hours to accommodate the unavoidable mad dash to the bathroom.

“Everyone I know is watching the game. It’s gotta be for you,” Jim said, stretching his long legs onto the ottoman.

I struggled to lean forward and grab the phone.

“Probably your mom,” he continued.

I nodded. Mom was checking in quite often now that the baby was two days overdue. An entire five minutes had passed since our last conversation.

I sat to attention. Jim glanced at me, frowning. He mouthed, “Who is it?” from across the room.

“Is this the Connolly residence?”

“Are you a relative of George Connolly?”

“Can you tell me the last time you saw him?”

My breath caught. “The last time we saw George?”

Jim stood at the mention of his brother’s name.

“Is he a transient, ma’am?” Dowling asked.

I felt the baby kick.

“Hold on a sec.” I held out the phone to Jim. “It’s the San Francisco medical examiner. He’s asking about George.”

Jim froze, let out a slight groan, then crossed to me and took the phone. “This is Jim Connolly.”

The baby kicked again. I switched positions. Standing at this point in the pregnancy was uncomfortable, but so was sitting or lying down for that matter. I got up and hobbled over to Jim, put my hands on his back, and leaned in as close as my belly would allow, trying to overhear.

Why was the medical examiner calling about George?

“I don’t know where George is. I haven’t seen him for a few months.” Jim listened in silence. After a moment he said, “What was your name again? Uh-huh . . . What number are you at?” He scratched something on a scrap of paper then said, “I’ll have to get back to you.” He hung up and shoved the paper into his pocket.

Jim hugged me, his six-foot-two frame making me feel momentarily safe. “Nothing, honey.”

“What do you mean, nothing?”

“Don’t worry about it,” he whispered into my hair.

I pulled away from Jim’s embrace and looked into his face. “What’s going on with George?”

Jim shrugged his shoulders and then turned to stare blankly at the TV. “We lost the game.”

“Jim, tell me what the medical examiner said.”

He grimaced, pinching the bridge of his nose. “A body was found in the bay. It’s badly decomposed and unidentifiable.”

Panic rose in my chest. “What does that have to do with George?”

“They found his bags on the pier near where the body was recovered. They went through his stuff and got our number off an old cell phone bill. They want to know if George has any scars or anything on his body so they can . . .” His shoulders slumped. He shook his head and covered his face with his hands.

I waited for him to continue, the gravity of the situation sinking in. I felt a strong tightening in my abdomen. A Braxton Hicks?

Instead of speaking, Jim stood there, staring at our blank living room wall, which I’d been meaning to decorate since we’d moved in three years ago. He clenched his left hand, an expression somewhere between anger and astonishment on his face. He turned and made his way to the kitchen.

Jim opened the refrigerator door and fished out a can of beer from the bottom shelf. “Does he what?” He tapped the side of the can, a gesture I had come to recognize as an itch to open it.

“Have any scars or . . .” I couldn’t finish the sentence. A strange sensation struck me, as though the baby had flip-flopped. “Uh, Jim, I’m not sure about this, but I may have just had a contraction. A real one.”

I cupped my hands around the bottom of my belly. We both stared at it, expecting it to tell us something. Suddenly I felt a little pop from inside. Liquid trickled down my leg.

“I think my water just broke.”

Diana Orgain is the USA Today Bestselling Author of the Maternal Instincts Mystery Series, Love or Money Mystery series, and The Roundup Crew Mysteries. Diana is also the New York Times Bestselling co-author of the Scrapbooking Mystery Series with Laura Childs. To keep up to date with the latest releases visit Diana at https://dianaorgain.com