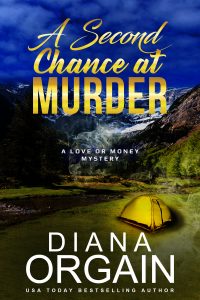 He nodded slowly and then he sagged like a deflated balloon. “My
sister’s not in our tent,” he confessed. “I came out to find her. She’s got
a bad habit of going off on her own and I want to win this stupid
contest. If I don’t get control of her, I can kiss this thing good-bye.”

A nervous energy wiggled through my stomach.

His sister was missing and so was Scott.

Okay, maybe missing was an overstatement. But he sure as hell
wasn’t where he was supposed to be and according to Parker, his
sister, Victoria, wasn’t, either.

I picked up my phone. “Where do you think she skulked off to?”

He shrugged. “I was going to check the outhouse. She’s probably
not there though, because she would have come back by now, right?”

I remained silent. Silence was usually the best way to get informa‐
tion out of people. At least that’s what they’d taught us at the police
academy.

“Anyway,” Parker continued. “I figured I’d walk down the trail to
the restrooms, then check the path that goes to the mountain stream.

It’d be just the kind of thing she’d do alone.”

My stomach churned as I considered that perhaps she wasn’t
alone. A midnight stroll to the mountain stream would be right up
Scott’s alley, too. I flashed my light against the dark soil, illuminating a
small circle. “Let’s get a lantern,” I said. “If we’re going down to the
river, we’ll need more light than this.”

Parker disappeared back into his tent. I returned to my own tent,
tossed my cell phone onto my sleeping bag and grabbed my lantern.

When I left my tent, Parker was already at the picnic table, igniting his
gas lantern. He stretched out his arm and blue light shined across the
path.

Before we left camp, I grabbed a slim log near the fire pit. Parker
gave me a strange look, then picked up his own log. “If we come
across a bear, we’ll be prepared, eh?” he asked.

I didn’t answer him and we set off in silence. It was so dark I could
make out the stars. I hadn’t seen the Little Dipper since I’d been home
at Cottonwood. One of the things I hated about living in a city was
not being able to appreciate the stars. It had to be country dark in
order to see the constellations.

The dirt trail crunched under my boots as we walked. I cursed
myself again for letting Becca talk me into the show. What exactly was
I doing walking in the pitch dark next to a stranger I didn’t trust,
freezing my derriere off, and carrying a stick?

Looking for my boyfriend, that’s what.

My heart did a little flip-flop as I thought of him. He’d been
excited about the trip, looking forward to seeing places he hadn’t trav‐
eled to yet. Spain was only the beginning of our journey. The final
locations hadn’t been disclosed to us, but we knew we could expect at
least five destinations.

Parker and I reached the outhouses, which were as we’d expected:
dark and empty.

Earlier in the day we’d all arrived at camp by bus. It’d been hot in
the afternoon and we’d gotten filthy pitching our tents. The crew had
suggested a short hike to the river and even though everyone was
exhausted from the day of travel, we’d enjoyed the time by the water.

Parker turned toward the stream. “Everyone thinks you and Scott
are particularly tough competition.”

He was making small talk to ease his nerves. I knew the feeling.

“Because you won the other show.”

“The other show had been a glorified version of The Dating Game.
If that’s even the right way to describe it. I mean, we didn’t have to do
anything. No zip lines or rafting or whatever extreme things they
have in store for us here.”

“You guys rock-climbed,” he said.

I didn’t want to tell him the rock-climbing had been staged. After
we’d had a disaster with the bungee jumping, the producers didn’t
want to risk the liability. Anyway, what good would it do to argue my
limitations? That would be silly.

We walked down the steep path in the dark, the lantern barely
casting light a few inches ahead of us.

“I think we should be noisy,” I said. “That way any critters drinking
by the stream will know they have company and skedaddle.”

Parker called out loudly, “Victoria? Vicky? Are you here?” He
glanced nervously at me. “No offense, but if we find the two of them
in a compromising position, you won’t hold it against me, will you?”

Fear jolted through me.

What an idiot I was!

Until that moment, the thought of Scott getting to know Parker’s
sister in the biblical sense hadn’t occurred to me. Could it be that my
brand-new boyfriend, the one I’d fallen for so hard at the end of the
last show, was cheating on me? I felt sick to my stomach.

“Don’t say that. Why would you say that?” I asked.

“Well, don’t get me wrong, I love my sister, but she plays fast and
loose with social mores. Like she wouldn’t think twice about getting
together with someone else’s boyfriend. She’ll just excuse the behavior
by saying she’s breaking down the competition.”

A howl pierced the night, stopping Parker and me in our tracks.

It’d come from the direction we were headed. I tightened my grip on
the log I carried.

“Was that animal or human?” Parker whispered.

“Maybe we should go back and get some of the others,” he said.
He was probably thinking of Cooper, ex-NFL, the guy was bigger
than a jeep, with muscles on his muscles.

Another howl skirted across the night. This one definitely human.

We took off running, down the embankment. Suddenly the earth
fell away from us and we flew through the air.

What the devil was going on?

Parker screamed out. My arms helicoptered through space, my life
flashing before me.

Dear God! We’d just run ourselves off a cliff.

The wind buffeted my face as I sped through air. The horror of my
impending fall sent my nervous system into overdrive. My fists tight‐
ened, my jaw clenched and my heart ached for Scott. I wanted to see
his face again.

Did he know how much I loved him?

The ground seemed to rush up to meet me, and abruptly my feet
crashed into the earth. I landed with a jolt, dropping my lantern and
the log. My boots locked onto ground, pitching my body forward so
that my hands dug into the sandy beach of the riverbank.

Air rushed into my lungs as Parker hurtled down next to me. He
landed awkwardly twisted on his side, his lantern and log smashing
together near a rock.

We were in a clearing by the river, the light of the waning moon
barely enough to make out the cliff we’d taken a tumble off of. It was
only about six feet high, but in the pitch dark the fall had felt eternal. I
was lucky to have landed on my feet.

There was a rustling sound approaching us. Someone running
toward us. I grabbed the lantern and called out. “Scott?”

“Victoria!” Parker said, moving himself into a sitting position.

She rushed forward. “What happened? What are you doing out
here?” She gave me a strange look.

“Looking for you,” he said. “What are you doing out here?”
She was bundled up like both of us, holding a small LED flashlight.

“It was so cold I couldn’t sleep.”

A blank look crossed her face. “Who’s that?”

“My boyfriend,” I said, impatience building inside me.

“I figured that. I meant, what does he look like? Which one was
he?” She pressed a hand to her temple. “We met so many people
today.”

“He’s tall. Shaved head.” Sexy as hell and you better keep your hands
off him.

She smiled. “Oh yeah. That guy. He’s hot.” She shined her flashlight
on me, giving me a cursory evaluating glance from my head to my
toes, then back again.

I’m sure I looked great sausaged in the parka I had on.

“I was hoping maybe he was your cousin or something,” she said.

She shrugged. “The only guy I’ve seen is the NFL guy.”

Parker struggled to his feet. “Ah, my ribs. I think I busted
something.”

Victoria pushed hard on Parker’s shoulder. “Oh, no you don’t. I
know you didn’t want to come here in the first place but you’re not
getting out of it!”

Parker grabbed his side. “Stop pushing me!”

I stepped between them. “Victoria. We heard something
howling . . .”

“Howling?” Victoria looked alarmed. “I haven’t seen any wildlife.
Maybe we should get back to camp.” She pointed upstream. “The path
actually bottoms out over there. We don’t have to scale this cliff.”

We walked upstream, my eyes scanning the river.

“It’s been a high-water year,” Parker said. “I remember them telling
us that on the bus ride.”

They had? I didn’t remember anything about the bus ride except
that Scott hadn’t let go of my hand. I’d been content to hold his hand
and rest my head on his shoulder feeling happy and full like a cat
that’d eaten a canary. Practically bursting with joy.

“The river’s moving fast, too,” Victoria said. “Someone could get
swept in it, huh? Scary!”

Oh, Scott. Where are you?