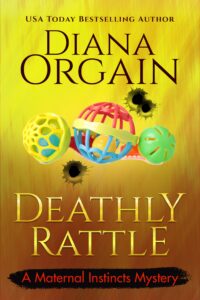 The view of the Golden Gate Bridge from Marina Drive is hands-down one of my favorite views of all of San Francisco. Today, the bridge was majestic, its towers bright and clear against the backdrop of blue water. The morning fog had burned off early, leaving the air smelling like spring.

Mom turned off Marina Drive and down the narrow street toward the theater that had staged her most recent play.

She parked in the lot outside the theater and stole a glance at me. “I feel sad. I hate that the play closed. It was so much fun.”

I nodded. “I know. You played the role perfectly, completely over-the-top.”

Mom laughed. “It wasn’t that bad of a play, do you think, Kate?”

I smirked. She knew exactly what I thought.

“If the director put on the play that Vicente had actually written, then it probably wouldn’t have been so bad,” I said.

The director had torn the original script apart and made it into the embarrassment we’d all had to sit through the past week. Vicente had written a drama, and the director turned it into a comedy. He’d even gone as far as to add a ridiculous melodramatic musical number.

“I swear, it was almost as though the director intentionally tried to make the play as terrible as possible. If that was his goal, he succeeded.”

Mom winced. “Geez, Kate. Why don’t you tell me how you really feel?”

“Not you. You were brilliant. I already told you that.”

Mom opened the car door. “Well” —she paused dramatically and then belted out the theme song from Dirty Dancing— “I had the time of my life.”

I groaned, simultaneously from her singing and the effort of climbing out of her car with my pregnant belly.

I was only a few months pregnant, so I suppose it was the fact that I was carrying twins that was to blame for me being a bit larger already. I walked around to the back, getting Laurie’s stroller out first while my mother fiddled with the car seat. Maybe it was the discomfort I’d felt getting out of the car, but the realization that I was going to have three babies under two years old in less than a year gave me a rush of anxiety.

It’s too early to start panicking, I reminded myself.

If I left my brain unchecked, I could get into a tizzy pretty quickly about just exactly how I was going to make my new career as a private investigator work.

Several cars pulled into the parking lot. A few of Mom’s costars, juggling Tupperware and pastry boxes, waved perkily in our direction.

Mom fastened Laurie into the stroller, and I grabbed the pizzas out of the back seat. The scent of cheese and pepperoni wafted into my face, and I automatically salivated like one of Pavlov’s dogs.

The downside of contributing pizza to a potluck!

We headed inside, and the moment we made our way into the lobby, my mother went into full grandma-mode, showing Laurie off to all her fellow cast members. After a moment, they seemed to disappear amongst the crowd. It looked like the rest of the cast had dragged along family and friends, just as Mom had, to help with the strike, because the lobby was jam-packed with people I didn’t recognize from the show.

My best friend Paula materialized out of nowhere. “Hey girlfriend, let me help you with those pizzas!” she said, taking the cardboard boxes from my hands and braving the crowd that surrounded the small table covered in snacks.

Paula had been the lead technical designer for the play—probably the single most impressive part of this disaster of a show.

“Of course, I came to watch them tear apart my masterpiece,” Paula said with a laugh.

Paula, ever the fashionista, wore a black pencil skirt and delightful pink-and-green-striped blouse that evoked springtime. I pointed at her slim waist. “How are you so skinny?”

Paula had two children: my favorite little boy on earth, Danny, and a two-month-old-infant, Chloe.

She glanced down at her figure, then at mine. “I’m not pregnant with twins, honey. Besides, you know breastfeeding burns a million calories an hour.” She flipped open one of the pizza boxes and promptly served herself and me.

The pizza was down my gullet before I could even feign a protest.

“Yo!” a familiar voice shrieked. I spun to see Deb Fisher making her way toward us, toting some mini-corn dogs. Deb was a local police officer Paula and I had befriended. “Your momma invited me to strike the set and maybe make some margaritas at your place after.”

Deb had recently been through a nasty breakup and seemed to be pushing the envelope of adventure a little outside mine and Paula’s comfort zone, but we loved her nevertheless.

While the cast and crew made their way onto the stage, I made good use of myself by passing out pizza and snacks as the set came down piece by piece. Right as I handed out the second-to-last slice, I spotted Vicente Domingo seated in the back row of the theater. He wore his trademark leather jacket, tight jeans, and biker boots. His arms were crossed, and instead of the normal charming smile on his handsome face, today he displayed a prominent scowl.

I felt bad for him. He and I weren’t exactly friends; as PIs who worked in the same city, we had a sort of friendly competition going on between us, but he’d gotten me out of some jams and did make me laugh quite a bit.

If I’d written a play and the director had totally destroyed it and humiliated me, I suppose I’d look about as peeved as he did at the moment. He was going to have a hard time ever finding another theater to pick up that play after those nasty reviews.

I made my way over to him. His square jaw twitched at my approach.

I couldn’t help but smile to see how nervous he was at whatever I was about to say. I chose grace.

“You know,” I said, sitting in the theater seat next to his. “I read the original script. And, as much as it pains me to say it, you’re an excellent playwright, Vicente. I wish your play had gotten into the right director’s hands. One who wouldn’t have rewritten half the play just to get a few laughs . . . or added in a random musical number.”

We sat in silence for a second, then we burst out laughing.

“I guess the number was pretty funny,” he said. Although it looked like it killed him a little to say it.

“Oh, no, it was hilarious. Very slapstick, but I still like your version of it a lot better.”

Vicente pressed his lips together and nodded. “Thank you, Kate. I appreciate hearing that.”

“Maybe you can find a different director to put on the show?” I suggested. “One that is more in line with your vision.”

“People will expect to see a comedy now,” he said. “This was the show’s debut, and it got a decent amount of attention—negative attention, but attention, nevertheless. Now, people are going to expect it to be silly. If I go to another playhouse and put this thing on, the audience will buy tickets expecting to see a comedy—a bad one at that. That twerp ruined this for me. It was supposed to be a drama. A serious play! Why he thought turning it into a musical was a good idea, I will never know. This had to have hurt his career as a director as much as my chance of becoming a playwright.”

“The reviews were terrible,” he argued.

“But reviewers hate everything, don’t they?”

He stroked his chin. “Maybe I have another shot. With the right director . . .”

I stood and clapped him on the shoulder. “That’s right, stay positive.”

He grabbed my hand and pulled me back down into the seat. “Kate, you have theater training. Would you consider directing—”

“What?” I practically screamed. “You can’t be serious.”

“I’ll produce it,” he said. “I have savings from my private investigation business. I can even pay you.”

My mouth fell agape, and I know I must have looked like an idiot, but I couldn’t seem to close it. “I’m pregnant with twins, Vicente.”

He nodded. “I know, but we can get this puppy produced before they’re even born.”

He frowned. “What does that have to do with anything?”

“You’re not at home now,” he countered.

“I’m here supporting you and my mom,” I said.

He jutted out his chin. “You don’t really like the play. If you did, you’d want to help me.”

He seemed to care a great deal about this play. It could just be the artist in him, offended at the disaster it had turned out to be. But I suspected it was more than that. There had been so much of Vicente Domingo in that play. The character was most certainly based on him—but how much of the plot was true? The female lead died of a heart attack after a riveting affair with the PI she had hired.

Could Vicente have had an affair with one of his clients like the character in the play?

He shrugged. “Kate, I told you it was just a play.”

“The woman in the play dropped dead after sleeping with a PI . . .”

Vicente practically squirmed right out of the narrow theater seat, but at least he had the decency to look insulted. “I’m a professional. Do you really think I would have a relationship with one of my clients?”

The play’s finale flashed through my mind. The main character’s love interest dead, a staged crime scene, and then the character bolting to San Francisco.

Could Vicente have gone through something similar?

I wiggled my eyebrows. “I was just thinking that maybe a tiny part of the play was inspired by a real-life situation?”

“Well, that case the main character was talking about at the end . . . it sounded very familiar,” I said. “Oh, and what was that line? Something about some broad handling your cousin’s cases?” I smirked at him, and he smirked right back.

When I had first gotten into private investigation, I’d been working for Vicente Domingo’s cousin, a local lawyer. I handled a case for him before Vicente had shown up out of nowhere, after moving into town, looking for work. I was unfortunately pushed out to make room for Vicente.