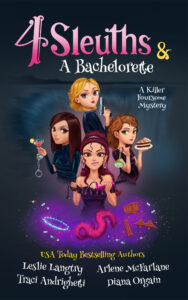 Did you miss Chapter Three?

Did you miss part one of Chapter Four?

“Too bad. With your Sophia Loren looks and height, I could make you a star—your very own baloney commercial.”

“Baloney?” Rock boomed before I had time to process the processed meat offer. “You been holding out on me, Zelda?”

“Like I told you, Rock, the Oscar Mayer gig doesn’t showcase all of your talents.”

“Does too. I went to Higgly Piggly and saw Babette passing out wieners with her hands.”

“Sure, and those wieners are heated. You wanna get a burn?” She blew out a mouthful of smoke to emphasize her point.

Rock retracted his hands in horror, then slipped his glove back on.

Zelda pointed her cigarette at him. “I didn’t think so. Now, I didn’t tell you this before because I didn’t want to get your hopes up, but I’m trying to negotiate you a deal with Ball Park Franks. They sell ’em cold in the package, so there’s no risk to your hands. And the best part is, you can flex your biceps when you tell customers the slogan about how they plump when you cook ’em.”

Rock’s eyes gleamed like the sheen on a hot dog fresh off the grill. “Heeeyyy, I see where you’re going with this. I could piggyback off the franks deal to break into bicep modeling.”

I smirked. Based on Rock’s IQ, the “piggyback” pun wasn’t intentional.

“Slow down, Rock.” Zelda stood and doused her cigarette in her highball glass. “That’s a tall order even for an ace agent like me.”

So much for dreaming big.

Zelda went to the food table, allowing me the opportunity to discuss drinks with Rock. “So what cocktails are you serving?”

Perfect for a sad Seventies happy hour. “I think we need something more fun.”

He rinsed a glass with water from the soda gun. “If you’re thinking New Orleans drinks like Hurricanes and Hand Grenades, I don’t know how to make them.”

“Definitely not those.” I didn’t want a repeat of Babette during Mardi Gras, and if we were doing NOLA drinks, I’d pick The Obituary Cocktail and The Corpse Reviver #1, #2, and #3 to go with the décor. “How about limoncello martinis and Campari spritzes?”

Mamma mia. Apparently, Rock wasn’t short for Rocco. I looked around the room for inspiration. Dora the Explorer balloons and a cake that read Happy Birthday Harry gave me an idea. “Let’s do margaritas as our fun drink, and The Dirty Harry for those who can handle the stronger stuff.”

Zelda returned to the bar with a plate of party food. She pulled out her lipstick-stained teeth, put them on a bar napkin, and gummed a cocktail wienie.

I tried not to stare at the crime scene happening in her mouth, but I couldn’t help myself. I’d been a PI in NOLA for three years, and I’d never seen characters like these.

My ringtone went off. I rummaged in my hobo bag for my phone, hoping it was Bradley. This time he was going to do me a favor where Babette was concerned and get me a red-eye flight home. That cabbie was right about not staying the night.

The cell display dashed my hopes. It was my parents’ number, and I promptly declined the call. The last thing I needed was for my meddling mom and Sicilian nonna to find out I was at a bachelorette party. The event was depressing enough without them calling me a zitella, or old maid, and whining about not having grandchildren.

As if to remind me of my old maid and childless states, a seriously pregnant woman came to the bar. She held up a picture on her phone of an infant and a cat. “How cute is this, Zelda?”

The agent was so excited she put in her teeth. “Whoa, baby! I see six-figure potential, Kate.”

“Yeah, Friskies, Purina, Fancy Feast…any one of ’em would pounce on this deal. Just think, your cat could pay for your baby son’s college at an Ivy League school.”

Kate’s arm dropped, and so did her eyelids. “That’s my daughter.”

“I’m her mother. I think I’d know her gender.” Kate shoved her phone in my face. “Does my little Laurie look like a boy to you?”

She did, but I had to be careful because the woman was clearly hormonal. “Of course not. Look at her…pink dress.”

“Right?” Kate shot a mama-bear look at the tactless talent agent and her thick-skulled client.

I pulled her aside before things got grizzly. “Between you and me, I don’t think Zelda sees too well. She thought my name tag said ‘Frenchie’ and offered me a baloney commercial. I mean, processed meat? At the very least, I’m prosciutto di Parma.”

A petite woman with hair straight off the cover of Vogue came toward us. “You must be Franki. I’m Valentine, a friend of Babette’s.”

“Pleasure,” I said. And it was because her heels added much needed sparkle to the room. “Speaking of the bachelorette, where is she?”

“She should be here fairly soon.”

“I’ve got the drinks under control, so if you want I can go to the lobby and keep an eye out for her.”

“That won’t be necessary. We’ve still got time.”

I let out a sigh of relief. “That’s good, because I would’ve had to keep an eye out for Mo, the hotel clerk, too.”

Valentine and Kate giggled, and I joined in. The party was looking up—until I saw a woman in a black dress and kitten heels careening toward us. She was the only other normal-looking person in the group, so I figured she was Merry, fleeing the other arriving guests, not that anyone would try to crash this party.

“Excuse me, ladies, but we’ve got a situation. Charlie’s been hitting the booze pretty hard, and I’m not talking mai tais with cabbage and bullets. He’s shooting straight tequila.”

I wasn’t sure where Merry got her drink recipes, but it was a good thing she’d been assigned the invitations. “Which one is Charlie?”

She unfurled her arm in the direction of a table opposite the bar. “I present to you Babette’s groom-to-be.”

A guy in a crumpled brown blazer and semi-unbuttoned shirt tossed back a shot and slammed the glass. He got up, stumbled to the bar, then jumped back and spun on the guests. “Who the hell brought that down here?”

Rock pointed a girly glove at me. “She did.”

I stiffened. Everyone was staring except for a woman in black glasses who was reading in a corner—and Zelda who was making herself another scotch and soda. It took me a second, but I realized that Charlie was talking about my suitcase. “Uh, I was running late, so I brought my bag with me. I can run it upstairs real quick.”

“What? No.” Charlie scanned the guests, almost catatonic. He wiped his nose with his forearm and semi-staggered from the room.