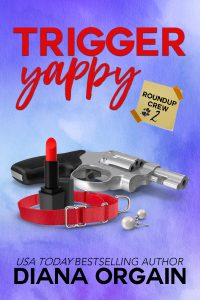 Yolanda and Fran craned to see what was happening between Gus
and me, although for all I knew they were checking out his backside. I
mean, that’s what I would have been doing if I had their vantage point.

“Stop being such a nervous Nellie, Cornelia!” Fran screamed into
her phone.

Gus ignored them, leaning in closer toward me. “I missed you. I
wanted to talk to you about something.” He freed my hand and ran his
fingers through his dark thick hair.

I poured him a glass of the Verdant Vines Merlot and watched him
work his lower lip.

Uh-oh. He’s nervous about something. Does he have bad news for me?
My stomach clenched at the thought.

I knew Gus had recently inherited one hundred percent of the
restaurant from his partner and had some restructuring in mind, but I
couldn’t guess what was causing him such distress at the moment.
I pushed the glass of wine toward him, but he reached for my hand
again instead of the glass. He laced his fingers through mine and said,

“Maggie, I got an offer I want to discuss with you.”

“That’s not even close to a fair price!” Fran shouted at Yolanda.

Gus glanced over his shoulder at Yolanda and Fran’s table. Fran
had hung up the phone and she and Yolanda were now having an
animated discussion. Yolanda looked insulted and Beepo yowled.

“Now is probably not a good time,” Gus said.

I tugged on Gus’s hand. “Come to the back. I should get started on
the Arf d’oeuvres.”

He laughed as he followed me to the makeshift kitchen. “Not the
Arf d’oeuvres!”

I yanked open the freezer and pulled out a bag of frozen little hot
dogs wrapped in mini-croissants. Gus made a face, as if merely
watching the proceedings offended his palate, but since he was the
best chef in town I forgave his food snobbery. In fact, I secretly
wished he was getting ready to ask me to dinner.

I turned from him and put the dogs in a blanket onto a baking
sheet. From behind me, he snaked an arm around my waist. He moved
his lips close to my ear and asked, “Are you really going to take that
purser job?”

His breath on my ear warmed my blood, and as I much as I wanted
to say, “Forget the stupid job,” I knew I couldn’t. My failed stint as a
financial advisor in New York had put a significant drain on my
savings and now California rent was driving the nail in the coffin of
what remained.

Not to mention, I’d wanted to travel, right? The Mexican Riviera,
the Bahamas, the Florida Keys, they were practically shouting my
name. And I’d be away from the dogs . . . away from the bar . . . away
from Pacific Cove . . .

Gus’s body heat drew me in and I leaned against him for a
moment. “You’re not making it easy,” I grumbled.

I slipped out of his embrace and turned the oven on. “I’m not tech‐
nically supposed to be working. Rachel promised she’d be here by
Yappy Hour.”

Gus and I both glanced at the oven clock at the same time. Five
minutes till. So like Rachel to be late. She’d be milking my covering
for her at the bar for as long as she could.

Gus smiled. “In that case, how about I . . .” He reached for my hip
just as my phone rang from inside my pants pocket. He pulled his
hand away, as if the ringing phone had given him a shock.

He bit his lip. “Do you need to get that?”
I didn’t even want to look at my phone. Who was more important
than Gus at this moment? Wasn’t he about to suggest making me
dinner? Or was I just daydreaming?

He lowered his gaze. “It could be Officer Brooks.”

That was a setup. I knew. He was prompting me to say he was
more important than Brad, but that sort of talk wasn’t going to get me
anywhere. Instead, I said, “Probably Rachel telling me she’s going to
be late.”

He watched me expectantly. My phone stopped ringing and even
though I felt compelled to pull out my phone and check the missed
call log, I didn’t. Instead, I said, “What did you want to tell me?”

He shifted his weight, and the oven, having reached its preheated
temperature, beeped. Almost on instinct, he reached over and grabbed
the cookie sheet and popped it in the oven.

I laughed. “I feel like I’m forcing you to cook Arf d’oeuvres against
your will.”

He smiled. “Cooking is in my blood. See, that’s what I wanted to
talk to you about. I received an opportunity that’s hard to pass up.”

“I got a call from one of the producers of Gourmet Games. They
want to fly me out to New York to audition.”

I clapped a hand over my mouth and squealed. Gourmet Games was
quickly becoming one of the top-rated cooking reality shows on tele‐
vision. “Oh my goodness! Gus, you have to take it! This could be the
opportunity of a lifetime.”

“I’m going to be on the cruise. You know that. This is perfect
timing.”

My phone rang again and he frowned.

“When do you leave?” I asked, ignoring my phone.

“I should go home and pack. There’s a red-eye tonight out of SFO.”

My throat suddenly became dry and I realized how much I’d miss him.

I wrapped my arms around his neck and pressed my check against his.

He shrugged. “I hope I can out cook the competition.”

“You can out cook anyone!”

“The competition is going to be top rate. I have to bring my A-game. In fact—”

A terrible screeching from the bar cut off his words and we both
rushed out to the bar, toward the sound. Yolanda and Fran were
standing, facing each other and screaming. Beepo was emitting a
high-pitched bark and growl.

“What’s going on?” I demanded.

“I’m not selling!” Fran said, fixing her chicken hat so that the tail
feather waved under Yolanda’s nose.

Beepo dove out of Yolanda’s arms and straight for the chicken on
top of Fran’s head.

Fran screamed. Gus hurried over to disentangle the dog from
Fran’s hat.

Fran yanked her hat out of Gus’s hand and stormed toward the
front door. “You can forget about your chicken empire, Yolanda. That’ll
happen over my dead body!” She pulled open the front door and
exited with bravado.

Gus turned to me and I shrugged. We both looked at Yolanda.

Yolanda affectionately stroked Beepo’s triangle ears. “Hush now,
Beep.” She put Beepo down, then looked at Gus and said, “There’s no
talking to some people. I wanted to buy out her hat business, but she
went cuckoo on me.”

My phone rang again from inside my pocket. Gus leaned in and
kissed me. “I think you have your hands full here, Maggie.”

I clutched at his arm. “Good luck! Let me know what happens,
okay?”

He nodded. “I will.” He waved at us and stepped toward the front
door.

I pulled the phone and glanced at the caller ID: Rachel.

Yolanda sipped what was left of her wine, but quirked an eyebrow
at me to let me know she was waiting on me.

A voice I didn’t recognize came on the line. “Ms. Patterson?”

My stomach clenched. Who was this? Where was Rachel?

“This is Nurse Joan. Your sister asked me to phone you to let you
know that’s she’s been admitted to the hospital.”

Yolanda hurried over to me with a look of alarm on her face.

“What’s going on?” She pressed her ear close to my phone.

“She has a case of salmonella poisoning,” Nurse Joan said. “Basi‐
cally, she ate some bad chicken.”

“There’s no such thing as a bad chicken!” Yolanda squawked.