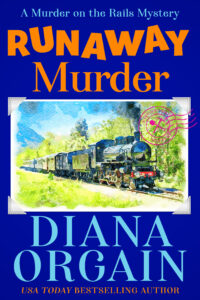 Did you miss part one of chapter three?

“And no one thought to tell me this before we left the platform? I’ve
got a fridge full of barbecue food, for goodness sake!”

“You’re a clever thing, Jessie,” Greg said with that smug grin again.
“I’m sure you’ll think of something.”

“It’s Jessica,” I snapped. “And Penny is shucking a whole box of
corn as we speak. What…” I scoffed in shock and outrage, looking
down at the desk as though searching for an answer. “We’ve only got
barbecue supplies, Greg. You’ve seen the size of my kitchen. It’s not
like we can keep supplies for every time you change your mind at the
last minute!”

“Hey.” Greg held his arms in the air and shrugged. “If you’re really
as good as you say you are, it won’t be a problem, will it?”

He grinned at me, and I could feel myself beginning to seethe, my
nostrils flaring. I had to get out of there—and I had to come up with a
new menu, stat. I leapt up and swung around, yanking the door open.

I didn’t dare turn and say another word to him, because I knew it
would not be a kindly word. I marched from the room, enraged by
what he had done this time. It was as though he was purposely trying
to trip me up. It wasn’t even that I was particularly against the idea of
a champagne brunch, but he could have at least told me before I’d
prepped for a barbecue! And the way he talked about tourists as
though they were gods drove me round the bend, as if the townsfolk
—who were nothing if not loyal to us—were worthless.

I wasn’t far down the corridor before I heard Walter’s light foot‐
steps pattering behind me. He had a strangely small stride for a man,
and it made him sound a little like a child.

He winced at my harsh tone and again and offered me an apolo‐
getic shrug. “It won’t be as bad as you think. It may even work out
nicely. I know you like a challenge.”

I closed my eyes and sighed, pinching the bridge of my nose.
Walter was a sweet guy, even if he was a little irritating at times. I
hadn’t meant to take my mood out on him.

“All right. Catch you later.”

Walter waved as he left, and I took a deep breath, nodding my
goodbye. Then I turned and returned to my haven.

“That’s another one who sends their compliments to the chef,”
Amy said as she walked backwards through the swinging door, a pile
of dirty dishes balanced in her arms. “Reckon they’ve licked the plates
clean!”

“Ew. That’s gross,” Penny replied, up to her elbows in suds as she
scrubbed the saucepans clean. I wouldn’t let them go in the dish‐
washer—my equipment was far too precious to risk having their
protective coatings stripped off by a machine.

Amy shrugged as she put the dishes down and then began to stack
them into the washer.

“They’re getting washed anyway, so what does it matter?” Vanessa
asked.

“As long as they enjoyed it,” I said, eyeing each of them as I stirred
the sauce on the stove.

“Said it was the best meal they’d had in ages,” Amy said.

“Not surprising.” Vanessa grinned. “Our Jessica’s the best when it
comes to cooking.”

“Thanks, Ness,” I said, looking fondly over at my friend.

“Smells good in here,” Amy said as she closed the washer door.

“Pie!” Vanessa raised an eyebrow. “Meeting with Greg really was
that bad, was it?”

“Am I that easy to read?” I asked with a mock grimace.

I laughed, then pulled the oven gloves from their hook on the wall
and opened the oven door. I embraced the heat that immediately
engulfed me, and the blueberry essence that swirled around in it. The
latticed pastry was a golden brown, and from the gaps, the fruit
bubbled enticingly.

I pulled it out, closed the door with my hip, and was about to put
the pie onto the rack to cool. But the train lurched to a sudden stop,
jolting us, and I dropped it. It landed upside down, a splatter of purple
and blue spreading out across the floor.

All four of us froze to the spot, looking at each other in surprise.

My heart began to race. This wasn’t good. Whatever it was, it wasn’t
good.

“What the heck was that?” Penny asked.

“Language,” I reminded her, raising an eyebrow. “And I have no
idea.”

“Something wrong with the engines?” Amy suggested with a shrug.

“Someone on the track!” Penny said with a giggle of nervous
excitement.

I looked out of the window to check where we were on the line.
We had stopped on a bridge!

“Definitely not signals,” I said, nodding out of the window at the
valley below us.

The others looked as shaken up as I felt. There was definitely some‐
thing wrong.

“Just . . . Amy, go out there and keep everyone calm, will you? Act
like this is all perfectly normal, that it’s a routine stop. I’ll go find out
what’s happening. Vanessa, sit tight.”

“What about me?” Penny asked as I was about to push the door
open.

“You clean up that ruined pie, please.”

The train was filled with questioning murmurs as I rushed
through the carriages on my way to Greg’s office.

“I don’t know, Dorothy,” I replied, smiling down at the sweet old
lady who had put a hand out to stop me. “But I’m going to find out.”

She had become something of a regular of late, riding the rails for the
sheer pleasure of watching the wildlife. Her hands were covered in
heavy rings and she wore, as par for the course, a huge floppy hat that
I was sure must get in the way sometimes. And, of course, she had
binoculars hanging around her neck, and a book about birds always
clutched in her hand.

“This isn’t a scheduled stop,” Carter cried from across the way. “I
demand to know what’s going on.”

“Oh, stop being such a grump,” Dorothy replied, looking at him
from over the top of her glasses.

Just then, we began to move again. I smiled as best I could. “You
see, all fine,” I said, then carried on down the aisle. They could argue it
out amongst themselves. Still, I could feel the lump in my throat
growing. I couldn’t put her finger on why exactly, but I knew this
unplanned stop was more than just a technical failure. When I finally
got to Greg’s office, he was talking animatedly with one of the engi‐
neers, so loudly that their voices could be heard from the corridor.
I pressed my ear against the door, but their words were too
muffled. I grabbed hold of the knob and burst into the room, deter‐
mined to know the truth. They both turned and looked at me, wide-eyed in horror.

“What is it?” I demanded. “What’s happened? Why has the train
stopped?”

“They’ve found a body, Jessica,” Greg said, his face drained of
color. “In the motorcar.”