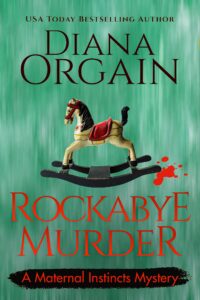 To Do:
1. Land new client.
2. Research the best baby-proofing system.
3. Sign up for prenatal exercise class?
4. Meet contractor who is doing garage reno.

I frowned at the batter in the kitchen aid mixer, wasn’t
brownie batter supposed to be smooth and thin? Or was that just for
brownies out of a box?

“Maybe I put in too much flour,” I murmured, shifting my
eight-month-old daughter Laurie on my hip. I glanced at the clock. The
contractor we’d hired to do the garage renovation was swinging by in
ten minutes to take a look at the space.

“Ma-ma,” Laurie babbled, and my chest filled with happiness.

“That’s the nicest thing anybody’s ever called me, peanuty pie,” I
said, tapping her on the nose. Too late, I realized my finger was
covered in flour, and now Laurie’s nose had a dusty white streak.
“Whoops! Sorry, honey.” I leaned toward the counter and reached for
a napkin to dab her clean.

With a gurgle of glee, Laurie lurched forward, and I swiftly
maneuvered to keep her from sailing out of my arms. “Now, listen—”

Laurie’s tiny fingers curled around the edge of the half-empty
flour jar, and time seemed to slow down as the plastic tub teetered on
the edge of the countertop and tumbled into the air . . . and I couldn’t
do anything about it without losing my grip on Laurie. I watched in
horror as it flipped upside-down, dumping a veritable mountain of
flour. The jar hit the kitchen floor with a thud, belching a cloud of
white powder into the air. Laurie giggled hysterically.

“What did you do, little miss? Now I have to clean that up before
the contractor gets here.” I glanced from the mess on the ground to
Laurie and back again, running my free hand through my hair. Then I
sighed and hurried to the storage closet for the broom, bouncing

Laurie as we went. Despite the angst pinching my chest, I kept my
voice calm. “Guess I need to move baby-proofing to the top of the list.”
Humming, I grabbed the broom and stalked back to the flour-covered
floor. Could I sweep one-handed?

Well, putting Laurie down was not an option. She’d beeline right
into the mess.

I bent down to pick up the bin, and Laurie wiggled in my arms
again, reaching toward the counter. Before I could see what she was
grabbing, the open carton of eggs landed on the ground, the
remaining three eggs oozing their yolks into the pile of white powder.

Laurie erupted into riotous giggles again, and I sucked in a deep
breath to calm myself.

“Oh right. Real funny,” I said to the little troublemaker in my arms.

“How about you play with toys in the living room for a few minutes
so I can get this cleaned up without any more mess?”

I glanced at the clock. Eight minutes. Gulping, I leaned the broom
against the counter and speed-walked Laurie into the living room,
setting her down next to a little yellow bus that sang the alphabet in a
voice that sounded like a howling chipmunk. Super annoying, but it
kept her engaged. Gritting my teeth, I pressed the button.

“A is for apple,” yodeled the howling-chipmunk bus.

Laurie clapped her hands in delight. I hated that bus—Mom, of
course, had bought it for Laurie over my protestations, saying it
would help her learn to read—but Laurie loved it, and right now, I
needed something to distract her.

“I love being a mom,” I muttered as I stalked back to the kitchen to
clean up the mess.

I turned the corner. Whiskers, our orange tabby kitten, was
crouched in the middle of the floury mess, licking up the raw egg.

Only she didn’t look like an orange tabby anymore—everything
except her face was white with flour, and eggs were smeared across
her back. Had she . . . rolled in it?

I couldn’t help it—I let out a shriek of frustration and despair.

Whiskers froze, her eyes widening as she looked up at me. Then she
darted past me, toward the carpeted living room. I reached out to grab
her, but only managed to brush her fur before she wiggled under the
living room couch. I balled my hands into fists. Even if I moved the
couch, I wouldn’t get her out of there until she was good and ready.

There was a hole in the fabric underneath, and Whiskers had figured
out how to climb inside the couch when she wanted a moment of
peace from Laurie’s grabby hands—or apparently when she knew she
was in big trouble. I took in the trail of eggy sticky flour between the
kitchen and couch, let a noise of desperation rise in my throat, and
then returned to sweep up the mess.

I heard a car pull up outside, and panic lodged in my throat. Was
the contractor here a couple of minutes early? I was still covered in
flour! But maybe I could at least get the floor clean-ish before he came
to the door?

As I dumped the last of the dry flour in the trash can and reached
for a rag to mop up the last of the egg-and-flour concoction, I
muttered, “Nice to meet you. Kate Connolly, private investigator,
stay-at-home mom, and professional flour janitor.”

And cat bather, I thought wryly, imagining Whiskers curled up in
the belly of the couch. Could you get dried egg-flour out of the inte‐
rior of a couch? Would it start to smell? The thought made me
nauseated.

“This is what I get for trying to bake while holding an eightmonth-old,” I grumbled. But I couldn’t very well deny the twins brownies.

The worst of my food cravings were past me—I hoped—but being
four and half months pregnant with twins certainly hadn’t made me
less hungry . . . or less interested in sugar.

I peered at the brownie batter. It really did look too thick. Had I
put in too much flour?

What’s the fix for that? Add milk?

The front door opened and closed, and Laurie squealed in delight.

Relief flooded me. Reinforcements were here. Now, I’d have help
cleaning up and eating the brownies but not before meeting the
contractor.

I glanced at my phone and saw a text from him.

An emergency came up at the project I’m finishing. Can I come by
tomorrow instead?

I slumped over the counter. I’d worked myself into a tizzy for
nothing. At least I wouldn’t have to meet the contractor looking like

I’d fallen in a vat of flour.

“Jim!” I called. A moment later, Jim came into the kitchen,
swinging Laurie in a circle.

He ground to a halt as soon as he saw me, his mouth twitching like
he was trying to suppress a smirk. “Hey!” he said in a strangled voice.

“What is it?” I snapped, crossing my arms.

His composure broke, and he burst out laughing. “Honey, you’re
beautiful.” He crossed the kitchen and planted a kiss on my lips. “But
if I know you at all, you’re going to want to wash your hair.”

My hair? Horror filled me. I’d gotten flour on Laurie’s nose . . . and
then run my hand through my hair. I raced to the bathroom and
looked in the mirror. Sure enough, a huge white streak ran straight
down the middle, parting my hair like some sort of frizzy brown
skunk.