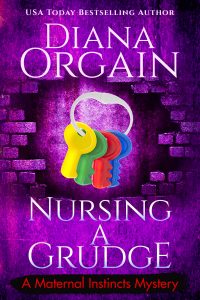 Did you miss Book Three ?

From inside Tea & Tumble, I checked my phone for the
umpteenth time. My best friend, Paula, was due to give birth any day
now, and I’d promised to babysit her toddler when the time came. The
café was empty save for myself, my four-month old daughter and
another pair of moms with their infants camped out in the corner.

Tea & Tumble was rated as the top pick for baby friendly cafes in
the Bay Area. It was decorated in pinks and greens with a colorful,
plush carpet in the corner of the dining area and a large leather couch.

On the carpet, the two infants drooled over picture books, while their
mothers were perched on the couch sipping lattes.

I glanced at Laurie, who cooed up at me from her baby carrier
nestled at my feet. “Paula’s going to have her baby any day now. Are
you ready for a new friend?”

Laurie batted her hand out, grabbing at imaginary items.

“I’ll take that as a yes,” I said. I freed her from the infant carrier,
then lowered my voice. “Then you can slobber over the book of the
month club choice like those other two in the corner.”

“Besides,” I said. “A girl can never have too many friends.”

A gust of wind vibrated the windows of the café, and I glanced
outside to see Jill parking her car.

I hadn’t seen Jill since quite some time before my pregnancy, and I
was looking forward to visiting with her and catching up on gossip.

She climbed out of the car, wearing an asymmetrical orange
blouse that caught the wind and billowed about her. She reached
inside the car and pulled out a tan coat that matched her leggings and
set off her black, stiletto thigh-high boots. As she wrapped it around
herself, she spotted me in the window and waved vigorously. She
sprinted across the street in her stiletto boots, short blond bob flap‐
ping in the wind.

Dear God, I wouldn’t be able to walk in those boots, much less run in
them, but Jill looks chic and fashionable, as usual.

I placed Laurie up to the window and moved her little wrist back
and forth in a hello. When I pulled her back into my lap, a man
wearing a long, dark coat and a black skull cap with a Smith &
Wesson logo on it turned the corner.

He raised an arm as if hailing Jill.

She didn’t notice him and pulled open the door to the café.

The wind rumbled through the café as Jill stepped in.

The moms in the corner glared at Jill as she made her way toward
my table, annoyed that their tête-à-tête had been momentarily inter‐
rupted. Jill ignored them as she clippity-clopped over to my table.

Jill pressed her frozen cheek against mine. “Hey, stranger!”

Jill and I had been chummy once, but had fallen out of touch. In
fact, now that I thought about it, it’d probably been several years since
we’d last seen each other. But since the birth of my daughter I’d felt
the need to get in touch with old friends and build a community
around her. I held her up. She was dressed in a little pink knit dress
that my best friend Paula had sent while visiting Paris.

“Oooh, love the dress,” Jill leaned in toward Laurie, who reached
out and grabbed a fistful of Jill’s blonde bob while shrieking with
delight.

Jill’s hand shot up to her head to save her hair from getting pulled
out by the roots.

She pulled off her coat and took the seat across from us. “Well, I
can see you’ve been busy so, of course, I forgive you.”

She didn’t know the half of it. We’d only talked briefly to set up
our lunch date and I still hadn’t told her about my new career as a P.I.

Since giving birth to Laurie, I’d managed to be involved in several
murder investigations and basically had decided to launch a private
investigation business. But since I didn’t have a P.I. license, I was
doing a semi-very-unofficial mentorship under Albert Galigani, an
ex-cop, to hone my skills and become marketable.

“Do you know the guy across the street?” I asked.

Jill frowned. “What guy?” She glanced over her shoulder.

“The one on the corner wearing the Smith & Wesson skull cap,” I
prompted.

Jill remained turned away from me. “Why would I know him?”

I shrugged. “I don’t know. I thought he called out to you when you
were crossing the street.”

She gripped the table in a rather alarmed way, then swiveled back
to face me. “I don’t know him.”

Something about the expression on Jill’s face told me she was
nervous about the man.

I stared out the window, past the fog, and studied the man. He was
Caucasian and looked to be in his thirties. He wore a long, dark coat
and his skull cap was pulled down around his ears.

Jill waved away my concern. “This is San Francisco. There’s always
someone lurking.”

The swinging double doors at the back of the restaurant creaked
open and the hostess who had seated me approached. She handed us
menus, then ran a hand over her frizzy red hair. “Anything to drink?”

Jill bit her lip as she perused the back of the menu where the
beverages were listed. “I’ll take a Mexican hot chocolate.”

I flipped my menu over and scanned the list.

The waitress nodded and turned to go.

I found the entry: “Fiery Hot Chocolate | Muy Caliente! Our own
hot chocolate blend that really packs a kick. Starts creamy with a
hand-scooped ganache topping and ends with a spicy wallop.”

Jill laughed. “It’s not for the weak hearted. It’s made with chipotle
chili chocolate.”

“I’ll stick with the coffee.”

The waitress looked at me through her eyelashes. I understood the
look as a warning not to waste her time again.

She turned on her heel and disappeared through the swinging doors.

“So what have you been up to?” I asked. “Catch me up on your
career. I understand you’re the hottest restaurant critic around.”

Jill sat to attention. “An accidental career. Who would’ve thunk it?”

I balanced Laurie on my lap, letting her dig her feet into my thighs
as she practiced putting her weight on her legs. She could only keep
herself upright for a moment before her legs turned to Jell-O again.

“You always had a discriminating palate,” I said.

She giggled. “You mean I like to eat. And I know how to string a
few snarky remarks together. Enough, anyway, to make people pay
attention.”

In the past few months, Jill had become somewhat of an internet
sensation. Her reviews were everywhere and she was always popping
up on the latest foodie blog.

Jill put a finger to her mouth and eyed the moms in the corner.

Although they seemed engrossed in their own conversation, Jill
leaned in and whispered. “Don’t talk about that, though. My picture’s
not out there and I don’t want people to know who I am. Not yet
anyway.”

I nodded. “Are you going to do a review of this place?”

“If I have time.” Jill shrugged. “Maybe. It’s just that something’s
happened recently that’s kind of stuck in my craw.”

I waited for her to continue, but instead of saying anything she
rubbed at her chin.

“I reviewed Brent Miles’ latest restaurant. Or should I say his
attempt at a restaurant.” She made a face indicating how lacking she’d
actually found it. “Anyway, he called me. It was very…well,
frightening—”

“He threatened me.” Jill leaned across the table closer to me. “He
warned me that I need to recant the review. Said I better make it seem
sincere or else.”

She raised an eyebrow at me and shrugged. “I told him to stuff it.
Just because he owns half of San Francisco he thinks everyone is
ready to kiss his ass. Well, he can kiss mine now, because I’m not
recanting anything!”

Her tone surprised me. I had always known she was tough but
now she seemed downright ferocious.