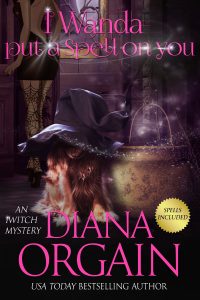 She entered the main area of the café and almost fell over in shock
at the crowd. There were rows of cars in the parking lot, and the line
was out the door.

“Oh dear,” she said to herself, realizing she’d given anyone within a
mile of the café a serious coffee craving.

I’m going to have to tell Gracie to watch where she sprays her perfume,
Maeve thought and got right to work.

Maeve and Donnie made a great team. He worked the register and
was actually much more of a people person than Maeve had expected.

He was kind to everyone, working fast while also asking politely how
so-and-so was doing–holding friendly conversations with each
patron. Maeve worked rapidly at preparing complicated drink orders
and occasionally slipping into the back to check on whatever muffin
or snack cake they had baking in the oven.

For the next two hours, Maeve and Donnie both remained on
their feet before the crowd slowly dispersed.

A few stragglers remained behind to sit and enjoy their coffee, but
she and Donnie were about ready to collapse come eleven o’clock.

“How about a coffee on me?” Maeve offered. “I’m impressed,
Donnie. You didn’t let that crazy rush trip you up at all.”

He smiled. “Thanks. And I would love some coffee … and maybe
just a minute to sit in the back and get off my feet? I think I’m going to
pass out!” He laughed.

“Take ten or whatever you need. Grab anything you want to eat.”

“Thanks, Maeve.” He took a sip of the cappuccino and grinned.

“I’ve been craving one of these for two hours now, but we got so
busy!”

He grabbed a ham and cheese pinwheel, a blueberry muffin, a
chocolate chip scone, and a pumpkin spice tart. For a moment Maeve
regretting offering a teen-age boy anything he wanted to eat.

Maeve laughed. “Yeah, yeah, I know, growing boy. Now get out of
my sight before I regret feeding you.”

He disappeared into the back with his handful of treats.

Maeve took a deep breath. Now that things had slowed down, she
had a moment to think. She realized the morning was about gone and
that Chuck Lowry hadn’t made his promised appearance. She prob‐
ably should have expected that from someone like him. She’d left L.A.
to get away from the Hollywood types.

Nothing but men who make broken promises out that way.

As she was pondering all the reasons Chuck Lowry might have
forgotten his promise to return, he entered the shop.

“Well, I’ll be,” Maeve said under her breath and stood upright
behind the counter.

He smiled as he approached, and her nose suddenly tingled. She
quickly covered her nose and mouth with her hands. “Oh! God, what
is that smell?” she asked as he stood right in front of her.

He blushed. “Well, um … I’ve been helping an older gentleman
named Tommy Ether at his farm this morning. A … um … a cow gave
birth this morning. I played catcher.”

“Oh! That’s just lovely!” Maeve said and then laughed, still
covering her mouth and nose. “I’m so sorry, but … you really stink.”

“I know. It’s been one of those mornings,” Chuck said with an
embarrassed look about him.

“What were you doing helping Mr. Ether on his farm?” Maeve
asked curiously.

“What? You think because I’m a celebrity that I wouldn’t stop to
help an old man birth a calf?” Chuck questioned. “And shovel manure
… And clean out a barn …”

Chuck honestly looked like he was going to pass out reliving his
morning to her.

“You know what, I’m going to call you on it. You’re full of it,”
Maeve said, grinning. “No, Mr. Lowry, I don’t think you are the type
who would pitch in and help some old man on his farm out of the
kindness of your heart. So what really happened to you this
morning?”

“Okay, you got me. I ran into the old guy last night and helped him
walk a cow home that had gotten stuck in a ditch. He fed me dinner,
let me stay at his place, and then I got breakfast too … and apparently
that wasn’t all free. He made me work off my debt,” Chuck said, and
they both laughed.

“That sounds like Tommy,” Maeve said. “I haven’t known him long,
but he will put anybody to work. Can I get you anything?”

“How about a Columbian coffee for the road?” Chuck asked.
“Black.”

“Coming right up,” she said with a smile. “Not sticking around
today?”

“As much as I like this place, it has a bad memory for me,” Chuck
said, and Maeve raised an eyebrow.

“Yeah.” Chuck took a sip of his coffee as soon as she handed it to
him. “This gorgeous woman turned me down for a date last time I was
here.”

“I can be,” he said. “Unfortunately, I’m leaving town today. But I’ll
be passing back through in about month. I expect to see Listen: It’s Old
Fashioned running smoothly when I return so that I can enjoy myself
another Irish coffee.”

Chuck winked at her again before departing. Maeve shook her
head at him. That Chuck Lowry was certainly a character. She sighed
and allowed herself to smile in his general direction as he made his
way out the door.

I guess he’s not so bad, she thought.

As Chuck exited, Maeve spotted Mayor James come stumbling in
through the door, practically knocking Chuck over in the process.
Right behind him was a woman in a business suit; Maeve assumed it
was James’s new assistant.

Maeve watched with a bit of amusement as Chuck double checked
his shirt for coffee stains.

Well, well, well–Mayor James, Maeve thought. “You sure do have
some nerve coming in here,” Maeve said as James plopped down at a
nearby table. “Honestly! Unless you came here to apologize for the
way you’ve been treating me the past week …”

The assistant cut Maeve off. “Please, can you get him some water?”
the woman asked frantically.

There was a sincere look of concern in her eyes that jolted
Maeve.

Maeve took a better look at James. He was wheezing. She hurried
around the counter to pour him a cup of water.

“Susan, I’m fine,” James insisted as the woman took the water from
Maeve. “I just needed to sit down.”

“Are you all right?” Maeve asked. “What happened?”

“I don’t know,” Susan said. “We were on our way to city hall when
he asked the driver to pull over. He’s complaining of chest pains. I
think we should call an ambulance.”

“I said no!” James snapped and slammed the plastic cup down. “I
just got car sick is all.”

“Listen, O’Dare, I said I’m fine!” he growled. “It’s been a busy
morning. I only need a minute to catch my breath. Susan, why don’t
you get yourself something to eat while we’re here, huh?”
Susan hesitated, looking from the mayor over to the pastry
counter. “Fine,” she said. “But if you don’t start looking better real
soon, I’m calling an ambulance!” She turned to Maeve, and together
the women walked over to the counter. “I guess I’ll have a coffee …
and a cheese Danish, please.”

“Coming right up,” Maeve said. “So, you must be Mayor James’s
new assistant?”

“That would be me, and you must be Maeve O’Dare,” Susan said.

“The one whose calls James keeps making me forward to voicemail.
I’m sorry about that. You must have struck a nerve with him. What
did you do?” she asked in a whisper.

“I helped get his formerly married ex-girlfriend arrested,” Maeve
whispered back, and Susan snorted.

“Don’t worry,” Susan said softly so that the disgruntled mayor
couldn’t hear. “I got your back, hon. I’ll make sure the permit situation
gets sorted out.”

A wave of relief settled over Maeve.

Everything’s going to work out fine, she told herself.

Maeve smiled at the kind stranger. “Thanks! This one’s on the
house, Susan.”

Susan smiled back and thanked her. She took her coffee and
Danish and turned around, to see Mayor James tumble out of his
chair. Susan screamed and dropped her coffee. She ran over to the
crumpled man, yelling, “Call that ambulance!”