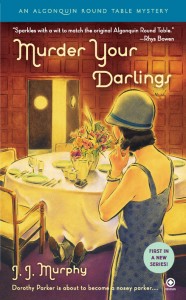 “Write what you know”—that’s the advice people give you when you say you want to write a book.
Bad advice (for me, anyway).
To keep my sanity, I had to write about something far, far different from what I knew. Why, you ask? Because all I knew about when I started writing was baby stuff—Cheerios, The Wiggles, Pampers and peepee.
You see, I was (and am) the parent of young identical twins. (We sometimes went through 16 Pampers a day, if my memory serves—though it rarely does anymore.) I loved my little identical blond babies (still do, of course), but I had to get away!
So, I checked out. I didn’t have the time to write, but I couldn’t help myself. I went on vacation…I left for New York City in the Roaring 20s. How? I started writing a mystery series featuring Dorothy Parker and the members of the Algonquin Round Table. These people and their daily lives—their witty banter over long lunches and sparkling cocktails—were about as far removed as possible from my long days full of Teletubbies and temper tantrums.
Dorothy Parker, as you may know, was a Jazz Age writer and poet who was as well known for her clever wisecracks as for her writing. (Even if you don’t know her, you’ve probably heard something she said or wrote, such as “Men seldom make passes at girls who wear glasses,” or “Brevity is the soul of lingerie.”) She was a charter member of the Algonquin Round Table, which was a group of like-minded writers, editors and critics who met daily for lunch, seated at a round table at the Algonquin Hotel.
By day, they spoke and wrote about art, politics and Broadway performances. By night, they smoke and drank and laughed till the wee hours of the morning, rubbing elbows with celebrities, gangsters and flappers alike, only to wake up late and do it all over again. The only way I could possibly make these real-life characters more exciting was to throw them into a murder mystery. (The first of these, MURDER YOUR DARLINGS, was published in January 2011. The second, YOU MIGHT AS WELL DIE, is just released.)
My babies aren’t babies any more. Yesterday I took them bowling, and 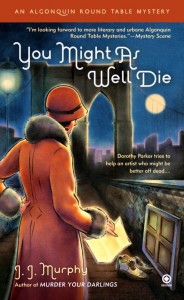 one of them bowled her first strike. By contrast, Dorothy Parker may have taken the New York subway to back-alley speakeasies, but I can’t imagine her driving a minivan to a suburban bowling alley.
So, I guess I’m living in the best of both worlds now. Soccer games, chicken nuggets and cartoons by day—and murder, mayhem and Manhattans by night.
But, boy, it’s a lot of work! I think I may need another vacation…

Please visit J.J. Murphy at http://www.roundtablemysteries.com/ and www.facebook.com/RoundTableMysteries.
Mystery Scene magazine called MURDER YOUR DARLINGS “A brilliant first novel … Murphy has courageously ventured into [Dorothy] Parker’s world, and does quite a creditable job … And the mystery ain’t bad either.”