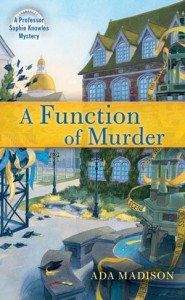 Thanks to my good friend, Diana Orgain, for allowing me to enter her blogosphere!

Full disclosure: when I visited here in March, I had just killed a librarian (in THE PROBABILITY OF MURDER, by my aka Ada Madison) and I got some well-deserved grief from blog visitors. I hope in the end, readers could see that Charlotte would still be alive if she had been ONLY a good librarian, but she had many dark secrets that contributed to her demise.

Now the next book in the Professor Knowles series has been released. In A FUNCTION OF MURDER, I’ve killed the mayor of the town. Shall I wear body armor while you pummel me with hardcover books? It’s time to see who’s more popular, librarians or mayors. Will it be close?

Here’s a snippet of A FUNCTION OF MURDER. All the graduation speeches and parties are over, and Sophie is happy to be meeting her boyfriend Bruce, a medevac pilot, for a late night stroll on campus. You can read the full first chapter on my website.

Make a comment for a chance to win a copy of the book.

From A FUNCTION OF MURDER

Bruce assumed his ritual hunky stance as I approached the parking lot near Franklin Hall. He leaned against the front fender of his new black muscle car, his arms folded across his chest, his dark hair rustling in the slight breeze. All he needed to complete the picture were pointy leather boots and a cowboy hat, but instead he wore his usual off-duty khakis and a black polo shirt. I couldn’t see his grin, but I knew it was there and I loved it.

Ten minutes later, we were next in line at Jimmie’s “Not Just Ice Cream,” across from the east side of campus. I almost chose a red velvet cupcake, to go along with the new dessert craze in Henley, but in the end walked out with my usual chocolate-chocolate milk shake.

“No dinner at the Inn?” Bruce asked. He who had dined on granola bars and orange-colored chips all day was satisfied with a waffle cone of butter brickle.

“The classier the restaurant, the smaller the portions,” I explained.

We strolled the campus, now minus the ugly temporary graduation stage, taking the long way to my office and Bruce’s car, both on the west side. Most of the buildings were dark, with only a smattering of students in each of the three dorms.

I was surprised to see lights on anywhere in the Administration Building, but especially on the ground floor of the faculty offices wing. The humanities profs weren’t lucky enough to have their own building as we in the math and science community did, so their offices were jammed together at the back of Admin. Some dedicated English or history teachers were working late tonight. I doubted they were poring over the fall syllabus. More likely, cramming to get grades done so they could take off and not show up again until Labor Day.

Bruce and I drifted toward the fountain, enjoying Jimmie’s ice cream, ready to take turns sharing “how was your day” stories that didn’t fit into text messages.

“The Bat Phone was quiet until about four,” Bruce said. “Then this semi on I-495 by Hopedale runs into an SUV coming back from the Cape.” He used his hands, tipping his butter brickle cone precariously, to mimic a collision that I knew couldn’t have had a happy ending. “This little kid, maybe six years old, was asleep on the backseat. No seat belt.” Bruce uttered a sad grunt. “We flew the boy and his mother to County General. An ambulance took the dad and the semi driver, but . . . ” He shook his head and drew a long breath.

We sat down on one of the curved concrete benches surrounding the fountain. I put my head on his shoulder and rubbed his back for a few quiet minutes.

“Did anyone make it?” I asked.

Bruce shook his head. “The little boy, Ricky, is gone. So’s his dad. It looks like the mother, who was driving, is going to be okay. And the semi driver doesn’t have a scratch on him.” He turned and brushed the concern from my face with his hand and a slight, resigned smile. “How about you?” he asked. “How was all the pomp and circumstance?”

“Really?” I asked Bruce, our shorthand for “do you want me to tell you silly, distracting commencement day stories?”

Outbursts from students, disputes over petty politics and whatever else was going on in the schools or at the mayor’s campaign headquarters, paled in the light of Bruce’s Bat Phone duties.

My most upsetting moments today, besides our aborted parties, had come from a student who was unhappy with her final exam grade and wanted me to reconsider.

I launched into the reasons for my annoyance with Elysse—she’d disputed points I’d taken off her exam for not following instructions on a statistics problem. She’d blasted me in an email after I explained my reasoning for the grade and declined to change it.

“She’s a transfer student and I’ve given her special attention all semester,” I said. I remembered all the times I’d sat in front of the whiteboard with the thin, pixie-haired blonde, reviewing math methods long after office hours were over. “I’ve gone out of my way to make up for any gaps caused by the transfer.”

“I’m sure you have,” Bruce said, trying hard to pay attention, but not fully engaged.

I switched topics and brought up the tension over the performance of charter schools and the way they’re funded. “Some of the families were accusing Mayor Graves of neglecting the charters,” I reported.

“The charter setup is made for disaster,” Bruce said, coming to life again. “You know what I mean from working at Zeeman, but the problem is system-wide. I remember when my niece was in a charter school in Boston. My sister was on the board and went nuts trying to keep it together, with more reporting and paperwork than teaching going on, and no one seemed to care about discipline or standards. It was always a question of, ‘Who’s in charge?’ You’ve got a school that is and isn’t under supervision of the district and the Superintendent of Schools.”

“He goes home to a cushy residence on the Cape, remember. During my pilot-to-the-stars days, I picked him up now and then to take him to a meeting here, but I guess now he has a home in Henley, also.”

“It’s hard to say who’s right in all this. It’s probably not all the superintendent’s fault. Not the principals’ either,” I said.

“Nothing works if there’s no clear line of authority.”

By ten fifteen, according to the old chimes from Franklin Hall, we decided it was time to leave. We stood and brushed off particles of dust and leaves deposited by the breeze, ready for the walk to Bruce’s car, marveling at how still and lovely the campus was. The graduation hubbub and the squealing from one of the last all-female graduating classes were over. Who knew what kind of celebratory sounds the new male grads would make in a couple of years? Perhaps they’d simply say, “Good job, Bro,” and knock knuckles.

Seemingly out of nowhere, we heard clumping noises—dragging sounds on the lawn and then shuffled footsteps on the pathway, coming from the direction of the dorms and the east end of the Administration Building.

We turned and saw a man in a light business suit staggering toward us, as if he would topple over on the next step. He looked a lot like the mayor, with auburn highlights showing up under the campus security lamps.

On closer inspection—it was the mayor.

I could hardly believe it. He teetered and swayed till he got to the edge of the fountain, where we’d been sitting, then fell in, head first. His commencement speech wasn’t that bad, I thought, that he had to get himself wasted. How embarrassing. What was he thinking? He should be grateful that it was Bruce and I who were here and not someone from his opponent’s campaign or parents with a decidedly negative opinion of him to begin with.

Bruce didn’t stop to judge or make a guess about what had happened or why. He snapped to it, on full alert, as if he were back in the Air Force in Saudi Arabia, or at the MAstar helipad rushing to get to an accident scene. He made it to the fountain in three long steps and lifted the mayor out by the shoulders. He laid him face down on the grass.

I was confused—why didn’t he put him on his back? That’s what television emergency crews did when they gave CPR. Face up.

Then I saw the blade sticking up in the air.