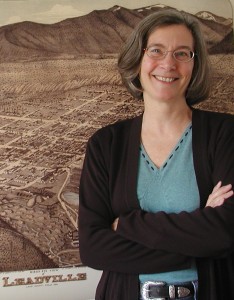 I Kid You Not: Children in the Silver Rush mysteries – by Ann Parker

Years ago, when I was started writing my Silver Rush historical mystery series, I pondered about the maternal standing of Inez Stannert.

Should she have a child? Or not?

You see, Inez leads a hard and complicated life. She lives at the ten-thousand-foot mark in the Rocky Mountains, in Leadville, Colorado, in the 1880s. Leadville is a silver boomtown—chaotic, bursting at the snowy seams with men and women driven by greed, desperate to get rich by any means including murder.

Not an ideal time or place to raise a child.

In addition, Inez’s husband, Mark Stannert, has disappeared without a trace before the first book even opens. Inez has given up hope of finding him alive, although a part of her wonders if her smooth-talking, good-looking gambler husband might have skipped out with a “pretty-waiter girl” or one of the actresses passing through town. In Mark’s absence, Inez manages the Silver Queen Saloon and runs a high-stakes poker game on Saturday nights. And then, “stuff happens.” The mysterious (but incredibly attractive) Reverend Sands comes to town. People close to Inez start to die under unusual circumstances (after all, this is a mystery). Inez investigates (after all, she is the sleuth).

I wanted to make Inez a mother, even though I wasn’t sensing a lot of maternal attributes 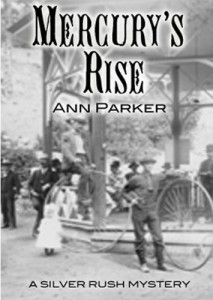 in this poker-playing, whiskey-drinking, pocket-pistol-toting woman of the West. But I thought that Inez would make a fiercely protective, passionate parent. She would do whatever it took to protect her children, if I were to bequeath them to her. I believed she “had it in her,” so to speak, to be a mother.

But how was she going to handle everything (run a saloon, conduct a dance of seduction with Reverend Sands, solve murders, etc., etc.) with children in tow? Even if I were to throw in a nurse or governess, I couldn’t see this working.

After careful deliberation, I hit upon a plan. I gave Inez a baby: William. But William has weak lungs and cannot remain at Leadville’s altitude. In fact, shortly before Mark disappeared, the Stannerts had decided to move to a lower elevation, for William’s sake. With Mark gone, Inez was torn: should she stay, where she could search for her husband, or should she go, to protect William’s health? Enter (conveniently) Inez’s sister Harmony, who becomes William’s guardian so Inez can remain in Leadville. Harmony takes William back East and the sisters write regularly so Inez can keep abreast of her son’s development. This way, Inez can continue to investigate those mysteries that keep cropping up in Leadville.

I was satisfied with this arrangement. But readers weren’t.

As the series progressed, readers became “invested in” William (or maybe the term is “obsessed with”). Why wasn’t Inez making plans to get him back? Why wasn’t she visiting him? How could she stand to give him up, and for so long? What kind of mother was she?

I finally threw up my virtual hands in surrender. Toward the end of the third book, Leaden Skies, Inez makes plans to see William and Harmony. In the fourth book, Mercury’s Rise, mother and child at last reunite in the spa resort town of Manitou Springs, Colorado.

However, William has not seen his mother for over a year, and he is now almost two years old. Do you have a two year old, or do you recall what they are like? How they respond to strangers? (Answer: Not well.) How about their favorite two-letter word? (Hint: N-O.)

Needless to say, the reunion does not go as Inez expects. Too, there’s an additional complication: Mark Stannert has returned, with all his considerable charm focused on Inez. He has a plausible (?) explanation for his long absence. He wants to see his son, and for the three of them to become a family again.

Even as Inez struggles to sort out her feelings toward Mark and the suspicious little naysayer who is her son, strange unexplained deaths are occurring in Manitou Springs.

And guess who must investigate….

Ann Parker is a California-based science/corporate writer by day and an historical mystery writer by night. Her award-winning Silver Rush series, featuring saloon-owner Inez Stannert, is set in 1880s Colorado, primarily in the silver-mining boomtown of Leadville. The latest in her series, MERCURY’S RISE, was released November 1. Publishers Weekly says, “Parker smoothly mixes the personal dramas and the detection in an installment that’s an easy jumping-on point for newcomers.” Library Journal adds, “Parker’s depth of knowledge coupled with an all-too-human cast leaves us eager to see what Inez will do next. Encore!” Learn more about Ann and her books at http://www.annparker.net

MERCURY’S RISE and the other Silver Rush mysteries are available from independent booksellers, amazon.com, and Barnes and Noble.

Leave a comment on this post to be eligible to win a Silver Rush mystery prize! Winner will be announced later this week. To see the rest of Ann’s virtual tour, check out her Appearances page on her website. 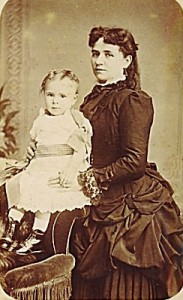 Inez, is that you? Probably not…