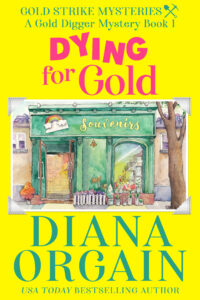 I think your store is haunted,” Mrs. Jeffries, one of our best
customers, screeched.

“Well, the nugget I was just looking at disappeared out from under
my nose! How do you explain that?” she demanded.

“Wendy,” I offered as way of explanation, pulling the diamond-encrusted
gold nugget out of my sister-in-law’s hands and passing it
to Mrs. Jeffries.

Wendy simply batted her false eyelashes and gave a wicked grin. “I
couldn’t resist. Isn’t it the most amazing thing you’ve ever seen?”

The store in question was The Nugget. Daddy’s family had been
part of the original gold rush of 1849. Our family went way back,
especially by California standards. I was the fifth generation of a
mining family, and The Nugget had kept our family in gold even when
our mine, The Bear Strike, had been forced to close in 1942 to support
the war effort.

I don’t know that I’ve ever seen Daddy happier than when the
price of gold shot up a few years back and it would finally be prof‐
itable to reopen the mine.

Ordinarily, The Nugget catered to tourists, but I’d convinced Daddy
to use the shop as a backdrop to put my best friend, Ginger’s,
exquisite jewelry designs on display, and all our best customers and
neighbors had come out for the occasion.

Dad came around from behind the counter. “Cut the champagne
off,” he said under his breath.

I laughed. “Daddy! This is a ladies’ gathering. One of the main
draws beside Ginger’s designs is the champagne.”

He leaned into me. “Key word being ladies. Do you see how they’re
acting?”

I couldn’t deny that there was a lot of shrieking going on and that
the general timbre in the room was reaching an ear-shattering pitch.

“You’re just mad that they’re so excited about Ginger’s design and not
your gold,” I teased.

Dad’s idea of jewelry was literally a nugget hanging off a chain,
and the chain, of course, must be gold. There was nothing more
appealing to him. The rougher the nugget, the more gorgeous Dad
thought it was. I had to admit that our regular clientele of tourists
seemed to agree.

They loved buying a “gen-u-ine” gold nugget that had been mined
from California’s oldest and still active mines.

Ginger came out of the back room cradling a sapphire necklace
she’d taken to fix that’d been broken a moment earlier when two
customers yanked it out of each other’s hands. The pendant of the
necklace was designed as a huge calla lily with delicate gold leaves and
a brilliant-cut sapphire as the blossom. The necklace was almost as
beautiful as Ginger herself.

She had honey-ginger colored hair and wore a form-fitting dress
that hugged every generous curve. The dress was indigo, and knowing
Ginger, it was no coincidence that it perfectly matched both her eyes
and the expensive sapphire she now held in her hand.

She stood between the customers, Mrs. DeLeon and Mrs. Harvey,
nervously glancing at me. “Uh, Frannie? Can you—”

“It’s for me,” Mrs. DeLeon said, grabbing at her pocketbook.

“No. You. Don’t!” Mrs. Harvey howled. “That piece is for me.
Wendy and I have been talking about it for ages!”

All heads turned toward my sister-in-law, Wendy, who dutifully
wrinkled her button nose, then admitted, “I did tell her I thought
there was a special piece she would like.” Wendy avoided Mrs.
Harvey’s wrath by taking great interest in the passing waiter. “Oooh!
Is that pâté?”

We’d hired Golden’s premier catering service, Bites & Bread, for the
event, and judging by the trays being offered to our customers, I could
already hear Dad complain about the bill that was sure to be anything
but bite-size.

The waiter, who was about all of eighteen, held the tray out for
Wendy as Mrs. Harvey took a great inhale, then puffed out her cheeks.

She let the air out slowly, breathing all over the canapé tray.

“I’m going to have to speak to Mr. Peterson! George!” she wailed.

Dad appeared with a smile on his face. He was ever the charmer,
but I could tell by the fine lines around his eyes that he was tired. One
more complaint from the wealthy, pampered socialites this party had
attracted and he might blow a gasket.

“Mrs. Harvey. Whatever is the matter? More champagne?” he
offered.

I bit back my laugh.

So much for cutting off the champagne!

“George. Will you please inform Mrs. DeLeon that the sapphire
necklace is for me?”

Dad grabbed the arm of another waiter, this one a redhead who
worked regularly at the Bites & Bread Bakery, and pulled a bottle of
champagne out of her hand. He topped off Mrs. Harvey’s glass. “Sap‐
phire?” He frowned. “Mrs. Harvey. You and I must have a talk.” He
glanced around, all the ladies suddenly craning their necks to get an
earful. “In private,” he mumbled, leading her toward the glass case that
held our most expensive gold jewelry.

Dad handed me the champagne bottle, then took Mrs. Harvey’s
elbow, leading her to the back of the store as he chatted with her,
tilting his head close to hers so his mouth was near her ear. She
suddenly erupted into a fit of giggles, then whacked my father on his
shoulder. I noticed her hand lingered on his arm, giving him the occa‐
sional squeeze.

Didn’t she realize she was the one being squeezed?

Mrs. DeLeon said, “Quick, Frannie. Ring me up for the sapphire
necklace so I can get out of here and away from Mrs. Harvey.”

I topped off Mrs. DeLeon’s flute. “I think she’ll change her mind
altogether about the necklace. Don’t worry.”

Mrs. DeLeon handed me her platinum American Express. “I’m not
taking any chances.”

I took the card and nodded. “It is a beautiful piece. I’m sure you’ll
be very happy with it.”

Ginger beamed as I rang up the necklace. “I can’t believe this is
happening. Everyone loves my stuff.”

“I knew they would. It’s beautiful,” I said.

Wendy slipped up next to us. “Totally unique,” she agreed. “I’m so
glad I convinced George to have the party. What a great idea I had!”

Ginger and I exchanged a look. Actually, the idea of hosting an
exclusive sale of Ginger’s handcrafted designer jewelry had been
mine, but we both knew Wendy would take credit wherever she could
get it.

I rang up Mrs. DeLeon and placed the beautiful sapphire necklace
into a black velvet gift box.

Wendy and Ginger circulated around the crowd, and Dad popped
open another champagne bottle while chatting with Mrs. Harvey.

As I finished helping Mrs. DeLeon, she leaned in and grabbed my
hand. “When are we going to see a ring on this finger, Frannie?”

I flushed. For some reason, I hated being the center of attention.
I’d much rather people notice the sparkling gold nuggets beneath the
glass counter than my hand above it.

“It’s getting to be about that time, isn’t it, dear?” Mrs. DeLeon
asked.

I slipped my hand out of her grasp and feigned a smile. Even
though I was hoping for a proposal soon, I wasn’t about to share the
details of my private life. “When he’s ready, I’ll be ready,” I said.
Mrs. DeLeon gave a throaty chuckle. “Well, my dear, don’t wait too
long. I know your father is dying for some grandbabies to help out
with The Bear Strike. Speaking of grandbabies, where did Wendy fly
off to?” Mrs. DeLeon turned to look for Wendy.