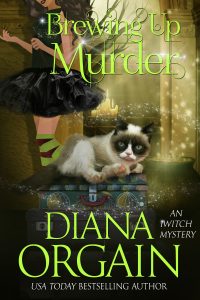 After a while, Maeve and her mom plopped down at an empty
poolside table and people-watched.

As they were talking, Maeve noticed a couple heading in their
direction. “You know those two?” Maeve asked. “They’re staring.”

“Hmm … I know of them. Rebecca and Kirk. They’re actors,” Fiona
said. “But, I don’t know them personally. Your dog seems to like them,
though.”

“Yes, hello,” Maeve said politely, and the woman motioned toward
the empty chairs. Maeve nodded, letting her know they were welcome
to sit.

The couple plopped down, and the woman smiled. “First, love
your songs. I am a big fan of Die, You Dirty Dog!”

“Oh hush now, Wanda. I wrote that song before adopting you.”
Maeve said, and everyone laughed.

“Did you know you made it into the tabloids around here last
month?” the woman asked.

“Yeah,” the man, Kirk, said. “Some picture of you with Chuck
Lowry at a café out in … Wisteria Pines? We honestly came over here
to get the scoop on that. Chuck’s an old buddy of ours. He’s been
AWOL for a while, and after we saw that picture in a magazine, we
figured he must have gotten caught up in a relationship or something
to have dipped out of LA for so long.”

Maeve blushed. “Oh, gosh, no!” she exclaimed. “He was just passing
through town about a month ago, and it was the weekend my café
opened. That was the first time I ever met him. He hung around some
that weekend … actually, my dog went missing, and he found her for
me. He even bought her that new collar she’s wearing.”

“I guarantee you Chuck’s got the hots for you, then,” Rebecca said.
“Chuck’s not exactly the type to do people favors.”

“You didn’t tell me Chuck Lowry paid a visit to Wisteria Pines,”
Fiona said. “That must have been interesting. I hear he’s quite a char‐
acter.” She then looked at Rebecca. “I’m not super into celebrity
gossip, but didn’t you two date?”

“Yeah, we were the on and off couple of LA’s B-list celebrities
everyone talked about for a while,” Rebecca said, blushing. “We didn’t
mix very well. But, we stayed friends … mostly. Thanks for
confirming you two aren’t dating. I thought Chuck had finally lost his
marbles.”

“Excuse me?” Maeve questioned. “What’s that supposed to mean?”

“I mean, don’t take this the wrong way,” Rebecca said, and Maeve
could already tell the oncoming comment was meant to be taken the
wrong way. “But, Chuck’s always had … standards. He always tried to
date above his tier, you know? Hard to imagine he would try to date
some washed up song writer who only had a couple of hits.”

“Well, aren’t you just a treat?” Maeve hissed. “For the record,
sweetie, Chuck asked me out. I turned him down because he seemed
kind of like a creep. Kind of weird that you two didn’t work out since
you seem like a match made in hell.”

Fiona snorted, and Rebecca glared in her direction.

“Okay, that’s enough, Rebecca. I think you might have had too
much to drink,” Kirk said, yanking his date to her feet. “Sorry, Ms.
O’Dare. It was … nice chatting with you.” Kirk dragged Rebecca away,
the two of them spatting.

Maeve looked down to see Wanda curled up and looking either
bored or sad.

“You all right, Wanda?” she asked, and the dog whined.
“Let’s walk her around and see if she perks up,” Fiona said. A cold
breeze had picked up, and that partnered with the catering winding
up, most of the party guests began to wander indoors.

“So, Chuck Lowry – as in the Jenny Loves Charlie actor?” Fiona
asked.

“Yeah,” Maeve said. “He seemed kind of full of himself. But, he did
track down Wanda for me. He probably drove all over town looking
for her. But, what was weird, was he broke into my house to leave
Wanda in there. I mean, that’s just weird. He’d left town, so I never
had a chance to berate him for that. Wanda was just sitting there with
a note and that pretty new purple collar. I changed the locks because I
have no idea how he got inside.”

“It’s funny, though. Back home in Wisteria Pines, all Wanda ever
wants to do is watch Jenny Loves Charlie. I’m kind of sad I missed the
meeting between Wanda and Chuck with how obsessed my dog is
with that show.”

“I didn’t care for it. The acting was kind of cheesy,” Fiona said. “It
had its perks, though. I’ll give Lowry this – he is a handsome fellow.
But, that’s pretty much all he’s got going for him. His acting is just
decent enough for a role like Charlie, but from what I hear, he’s a bit
arrogant.”

“Eh, he wasn’t too bad,” Maeve said. “Definitely not my type. Well,
I guess I can’t say that entirely. He kind of reminded me of Frank.” She
shrugged. “He had the same taste in clothes. But, I won’t ever fall for
that kind of bull crap again.”

“Good,” Fiona said. “I never liked Frank. Although, I do hope he’s
okay. I’m sorry you have to deal with all his junk right now. I hope the
police find him, but I’m glad he’s out of your life. You deserve better.
Just curious, is there anyone else in your life right now you care to tell
your mother about?”

Maeve blushed, and she thought of Joseph. Joseph was so different
from Frank. He was sweet, funny, and charming in his own little way.
A little bit of a klutz, but it was almost endearing. “Maybe,” Maeve
said. “Right before I left for LA … I kissed this cop from Wisteria
Pines, so I don’t know what to expect when I get back.”

“My girl made the first move?” Fiona grinned. “Oh, I’m proud of
that one.”

Maeve suddenly locked eyes with a woman across the room. Her
eyebrows raised. “No way!” she said. “Look, Wanda, its Jenny from
your favorite show.”

Wanda glanced up, and suddenly her hair stood on end, and she
wiggled backwards, almost afraid.

The pretty redheaded woman in the pink gown smiled and waved
across the room at them. They were far enough away that Maeve felt
the need to glance over her shoulder to make sure the woman was
indeed waving at them.

“Is that Selena?” Fiona asked. “The woman from Jenny Loves
Charlie?”

“Yup,” Maeve said. “With how much Wanda watches that show, I
definitely would recognize that face. I think she’s waving us over.”

Maeve glanced down at Wanda as they walked. She didn’t care for
how anxious her dog was acting.

When they reached her, Selena giggled. “Maeve O’Dare,” she said
happily. “Such a pleasure.”

Maeve smiled. “You know me?”

“Why, yes,” she said. “My old pal Chuck Lowry has mentioned
you a couple of times. Said if I ever pass through … oh, what was
the name of the town? Wisteria Pines … that I should stop by your
café.”

Chuck is telling people about my café?

“Your song writing is excellent, well, except for that one,” Selena
said.

“Oh, God!” Maeve said. “I apologize to your ears for suffering
through those lyrics. Not one of my best works.”

“Sweetheart, I was the one who bought the song,” Selena said.

“When I was trying to break into the music industry a while back.”
Maeve’s face turned red, and she felt physically sick. “That was
you! I sold it to a Sheldon … Green …”

“Sheldon Greenberg is my manager,” Selena said. “No hard feel‐
ings,” she stared Maeve down, and Maeve felt sure Selena meant the
opposite.

Maeve had had a number of successes, and most of those songs
were somewhat rage-inspired. Hers and Frank’s relationship had been
full of ups and downs, and she’d always pulled inspiration from her
own life.

She’d received a request for a love song with some sort of child‐
hood inspired metaphor, and Maeve had come up with the embar‐
rassing disaster that was Hopscotch. The song had flopped terribly, but
Maeve had never made the connection that Selena from Jenny Loves
Charlie was the woman who’d purchased the song. Frank had handled
all of the negotiations for her with that particular deal, so she’d not
even met the singer and had only heard her name once or twice in
passing.

“No, that ruined your music career!” Maeve almost felt like crying.
“It was so awful!”

Maeve felt so embarrassed she wished she could evaporate into
the air.

Her mother tapped her shoulder. “Maeve, I’m a little parched.
Getting a little old for these sorts of parties. Would you fetch me some
punch?”

“Sure, Mom,” Maeve said, grateful for the excuse to leave Selena’s
presence. She knew Selena was faking the friendly. Maeve could feel
the resentment coming off the woman in waves.

Well, Maeve thought as she headed toward the punch table, there
are worse things in the world!