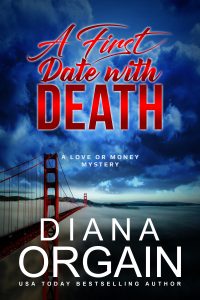 The journey back to the bridge felt endless. My eyes were
glued to Aaron, dangling beside me, and I couldn’t stop
myself from shouting repeatedly, “Aaron! Aaron! Answer me. Aaron!
Respond, damn it!”

Then suddenly I was moving up and he seemed to be at a stand-still,
maybe even descending.

What was going on?

Oh, God, was there another malfunction?

Would they drop me, too?

I stopped flailing and gripped the harness, as if gripping it would
make me more secure somehow.

Aaron’s body made its descent, the Coast Guard boat motoring
directly underneath him.

They must have determined that the Coast Guard would have the
fastest emergency response.

Taking a deep breath, I realized that I hadn’t stopped screaming
long enough to inhale. The water was now a great distance away, but I
continued to shout in vain, and by this point, I don’t think I was
saying anything intelligible.

The vague thought that I was in hysterics floated across my mind,
as if someone else had put it there, as if I were someone else and not
this shrieking woman.

My body was hoisted over the railing of the bridge and, despite the
hands gripping at me, I immediately collapsed onto the deck.

Pressing my cheek to the cold metal, I could feel the hum of the
traffic reverberate through my body. My screams subsided and I
found my voice matching the hum of the bridge in an odd, regressive,
self-soothing manner. I was shaking uncontrollably and because I was
splayed out on the deck, the sway of the bridge was more
pronounced, aggravating my nausea.

Another thought, as if spoken from somewhere outside my
head, commanded me to pull myself together. I stopped
humming and fought to get my legs under me. I tried to stand
up, but hands were pressing me down, a voice calling for a
blanket.

I couldn’t identify the voice and I certainly wasn’t going to obey it.

Not now that I seemed to be getting myself back on track.

I pushed against the hands and flipped over. It was the doctor,
Edward, trying to restrain me. I pounded my fists against his chest.

“He’s with the first responders.”

“I’m a first responder!” I yelled in his face.

“So am I,” he said, calmly putting a hand on my forehead and
pressing my head back on the deck.

So that was it? I was a victim? Someone in need of rescuing?

“Right, I know,” he soothed. He was holding my wrist and I real‐
ized he was taking my pulse even as he said, “You had a shock. I just
want to be sure.”

I leapt forward, shoving my elbow into Edward’s chest. This
classic self-defense maneuver pushed him far enough from me that I
was able to get to my feet. But it didn’t dissuade him from charging
me and grabbing me in a bear hug.

I punched at his shoulders fruitlessly. “Let me go!”

I buried my face in his chest as sobs racked my body.

He held me and stroked my hair, whispering soothing platitudes
into my ear.

I was vaguely aware of the commotion around me. Cheryl yelling
into her walkie-talkie, the crew rushing around, and the police sirens,
but God help me, I was also aware of my body’s reaction to Edward’s
touch.

His chest felt strong and solid. His body gave off a radiating heat
that enveloped me, making me feel safe.

I could barely feel my legs beneath me and I realized Edward was
holding me up. I tried to speak but no words came out. I was dizzy
and desperately trying to hold on to consciousness.

Don’t faint now, for God’s sake! a voice inside my head warned.

Nonetheless, Edward picked me up and began to carry me toward
the north side of the bridge, where our crew vehicles were parked.

A different kind of dread flooded me.

Would Paul respond to this call?

I recognized Martinez in one of the cruisers. I squinted at the
other car. It was Wong. They stepped out of their respective vehicles
as if in an orchestrated dance. Glancing at each other and communi‐
cating like cops, without words. Wong ran toward the crew and
Martinez cut Edward off.

“Is that Georgia Thornton?” he asked.

Edward nodded. “I’m taking her to her RV.”

“Does she need medical attention?” Martinez asked, grabbing at
my hand.

I squeezed his hand. “Hey, Marty.”

Martinez ignored him and called for an ambulance into the
walkie-talkie attached to his shoulder.

The fact that I was on the wrong side of things struck me hard. I
was the one who was supposed to be communicating with SFPD, but I
was no longer one of them . . .

That realization drew an involuntary noise from my throat, some‐
thing akin to keening.

I regained my composure and said, “Thanks. So kind of you to
say.”

Martinez smiled. “Okay, if you’re still able to be a smart-ass, I
think you’ll live.” He raised his eyebrows at Edward. “’Course, I ain’t
no doctor. Why don’t you take her to the RV like you said and I’ll
check on you guys in a minute.”

Edward nodded as two more patrol cars pulled over. I glanced at
them: Lee and Schrader.

Everyone would now be responding to the code Martinez had
put out.

No Paul yet, though. Thank God.

I cringed. The last thing I needed was for Paul to show up and, yet,
my voice had semibetrayed me. It almost sounded hopeful.

A shudder went through my body. I took it as relief, but Edward
said, “I need to get her warmed up before she goes into shock.”

He didn’t wait for Martinez to respond.

Inside the coach, Edward wrapped me in a blanket and squeezed
my hand. “Do you have any brandy here?”

He shrugged. “It calms the nerves.”

“I thought that was an old wives’ tale,” I replied.

The door to the RV banged open and the horror writer, Scott,
stood there.

“How’s she doing? The medics are here; they want to take a look at
her.” He looked around at the white carpet and the mirrored ceilings.
“Feels like Vegas in here.”

A uniform peeked in. It was a firefighter I didn’t know. He asked
me a series of questions.

I answered as best I could, while eavesdropping on Scott and
Edward.

“Holy cow! I couldn’t have written something like that! Did you
see him splat against the water?” Scott asked.

Edward frowned and shook his head, motioning in my general
direction.